Thirty-six subjects were randomly allocated into 2 groups. Eighteen subjects (mean age, 12.2 years; male-to-female ratio, 10:8) were assigned to receive treatment with the hyrax appliance (group A), and 18 subjects were treated with the computer-guided miniscrew-supported appliance (group B). The same type of expansion screw and expansion protocol was used in both groups. Linear and angular measurements of skeletal, dentoalveolar, periodontal, and nasal floor changes were performed on the pretreatment and posttreatment cone-beam computed tomography images (6-month follow-up). Descriptive statistics and the independent Student t test were used for the statistical analysis. Intraoperator reliability was evaluated using a 2 sample t test. The level of significance was P ≤0.05.

Computer-guided miniscrew-supported maxillary expanders allowed a greater transversal increase of the nasal-maxillary skeletal structures by reducing the dentoalveolar side effects of the tooth-supported devices.

The transverse maxillary deficiency, with particular reference to the growing patient, is a central and much-discussed topic in orthodontic literature because of the complex correlations with several pathologic and dysfunctional conditions and the multiple etiologic factors that characterize it. Crossbite is classified into 3 main types: dentoalveolar, skeletal, and mixed. The prevalence of the posterior crossbite in mixed dentition varies depending on the population, from 4.0% to 30.0%, indicating a relatively common malocclusion. Rapid maxillary expansion (RME) is a common clinical procedure for treating posterior crossbite and reduced maxillary width and is well tolerated by young subjects. From a biological point of view, RME creates large forces at the sutural site over a short period and produces immediate midpalatal suture separation by disrupting the sutural connective tissue. Therefore, in a growing subject, RME represents an effective orthopedic therapy. The RME can be performed with different expansion protocols in relation to the number of turns of the midline screw (ie, the activation rate of the screw). , A single activation of the expansion screw produces approximately 3-10 pounds (1.36-4.54 kg) of force. Apart from the desired skeletal effects in the suture area, these large forces also exert unwanted effects on the anchoring teeth, periodontium, the alveolar process, and other more remote skeletal structures. Although several studies are investigating the effects of RME on dental and skeletal structures, there is no consensus in the literature regarding which design or activation rate benefits the patients the most. ,

In addition, the majority of the research conducted on RME stability and side effects is limited to the analysis of dental casts and 2-dimensional radiographs (lateral and anteroposterior cephalograms). With low-dose cone-beam computed tomography (CBCT) technology, it is possible to obtain accurate radiographic images that allow clinicians and researchers to quantitatively evaluate hard-tissue changes across 3 dimensions. ,

It was hypothesized that the 2 RME treatments produce the same dentoskeletal, periodontal, and airway effects.

This parallel cohort study was conducted at the Department of Orthodontics of Sapienza University of Rome between January 2019 and January 2021. The clinical investigation was conducted in accordance with the ethical principles of the World Medical Association Declaration of Helsinki. The parents or guardians were informed of the content, risks, and benefits of the study, and written consent was obtained. The investigation was independently reviewed and approved by the local ethics committee (no. 5951). The eligibility criteria were as follows: (1) white children in late mixed dentition (with the persistence of deciduous maxillary canine) or permanent dentition, (2) unilateral or bilateral transverse maxillary deficiency of at least 8 mm, (3) no previous orthodontic treatment, (4) good oral hygiene, and (5) no systemic syndrome involved.

Two hundred subjects were assessed for eligibility. On the basis of the inclusion criteria, 166 subjects were not eligible. Of the 38 eligible, 2 subjects did not consent to the treatment after being informed about the possible complications and the need for periodic clinical checks and were excluded. This study included 2 groups of subjects according to the type of expander used: the tooth-borne hyrax appliance group (group A) and the bone-borne computer-guided expander appliance group (group B). A randomization sequence was created using Clinstat statistical software (Martin Bland, York, United Kingdom) for the treatment allocation of the 2 groups. In group A, the tooth-borne expander (a hyrax appliance) was designed with the band on the maxillary first molars; in group B, the bone-borne expander was a miniscrew-supported RME appliance with 4 miniscrews inserted both in the paramedian and parapalatal position of the palatal vault ( Figs 1 , A and B ). To ensure a minimally-invasive miniscrew insertion, a surgical guide was created (Easy Driver; Uniontech Orthodontic Lab, Parma, Italy) using a 3-dimensional (3D) printer (Stratasys OrhoDesktop; Stratasys, Rehovot, Israel) ( Fig 2 ). A minimally-invasive computer-guided miniscrew insertion with a computer-aided design and manufacturing surgical guide.

Appropriate miniscrew insertion sites were identified on the basis of 3D images created by combining cone-beam computed tomography and dental digital model images. The length and diameter of the self-drilling titanium miniscrews used (Benefit system; PSM Medical Solutions, Tuttlingen, Germany) were predetermined in the planning phase. Both the miniscrews and the RME device were inserted at the same time. No unexpected events or complications were recorded during the miniscrew insertion. In both groups, the expansion screw was activated simultaneously as the device insertion; the same type of expansion screw (10 mm; hyrax click; Dentaurum, Ispringen, Germany) and expansion protocol were used. The expansion screw was activated by 4 quarter turns on the first day and by 3 quarter turns per day in the active phase of treatment (0.20 mm per turn, 0.6 mm daily) until an 8 mm screw opening was achieved ( Figs 1 , C and D ). The CBCT images of the patients were taken just before applying the RME device (T1) and posttreatment stage (T2), at the 6-month retention period. CBCT images were taken using the Scanora 3Dx cone-beam device (Soredex, Tuusul, Finland). The exposure settings were as follows: 10 mA, 90 kV, 10 mA, total scanning time of 15.0 seconds, effective radiation time of 4.0 seconds, voxel size of 0.2 mm, and scanning area of 14 × 16.5 cm, with an effective radiation dose of approximately 524 mGy/cm. 2 Patients were placed with the Frankfort plane parallel to the floor with cotton rolls inserted between the 2 dental arches. Digital imaging and communications in medicine files were imported, and 3D reconstructions of maxillary structures were performed using the software Simplant (version 17.0; Materialise, Leuven, Belgium).

Before taking measurements, it was necessary to standardize the position of the head according to axial, coronal, and sagittal planes selected in both phases of the study. 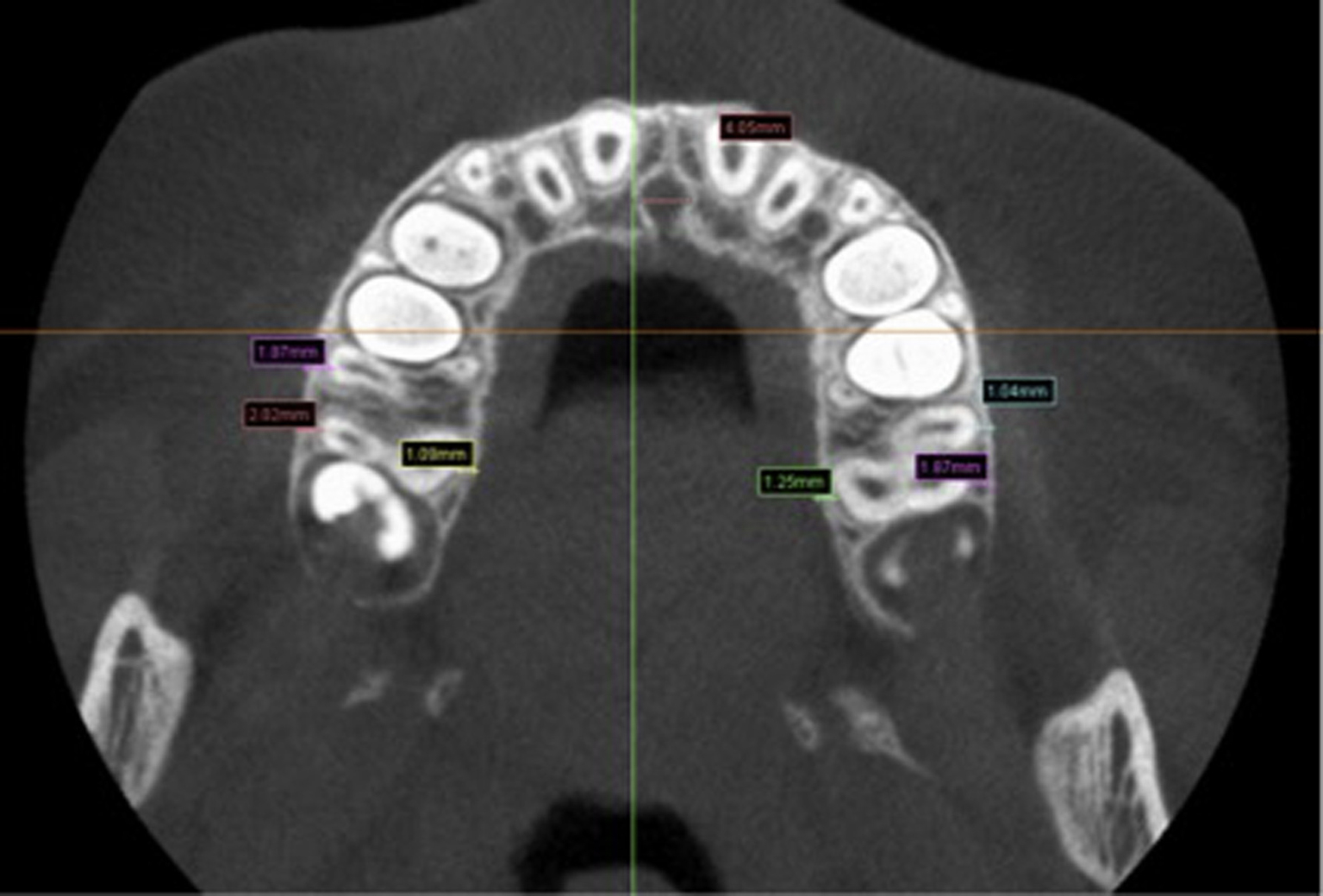 Measurements of buccal and lingual bone plate thickness were performed in the axial section, parallel to the palatal plane, passing at the level of the maxillary right permanent first molar furcation. 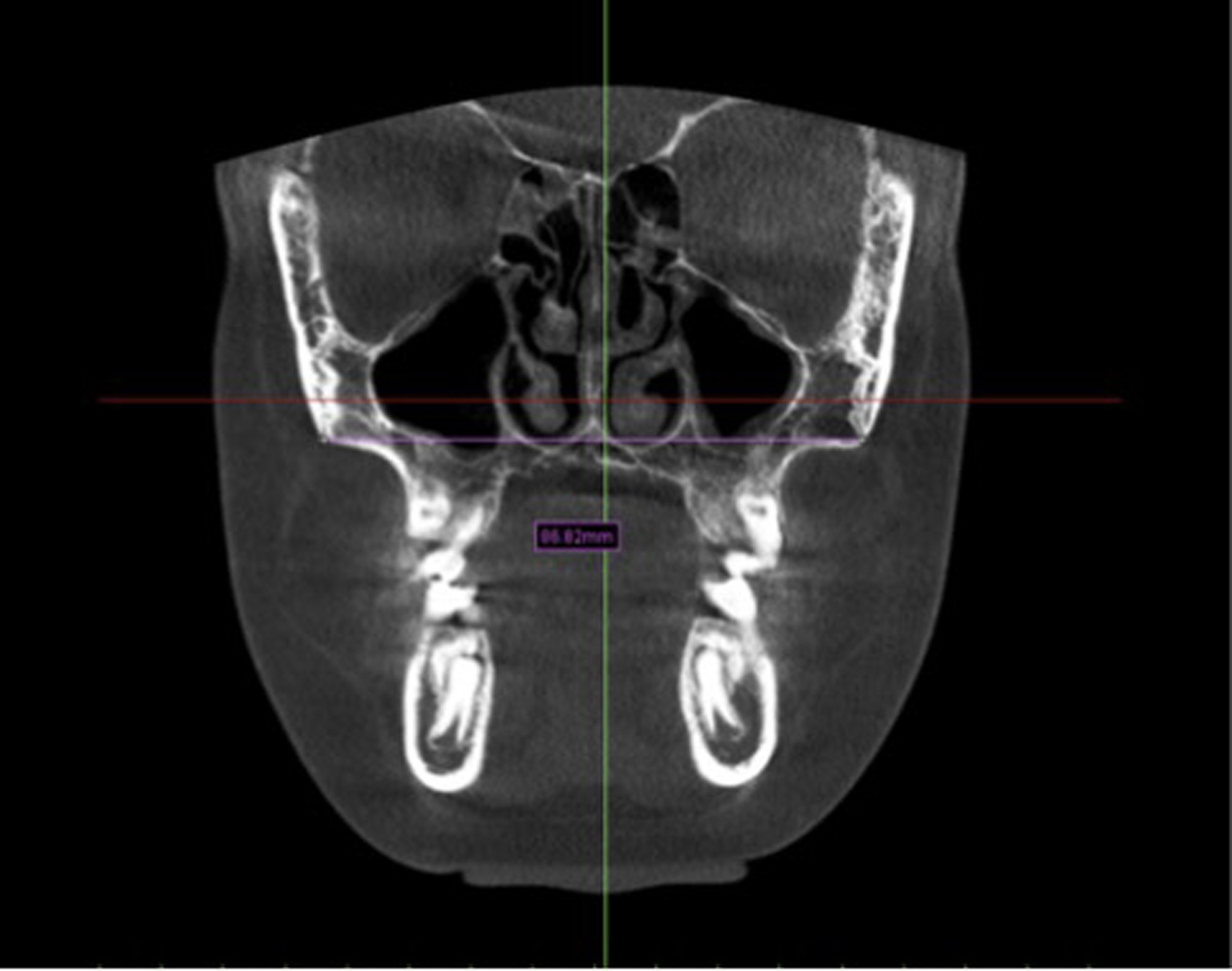 Measurements of the outermost point of the right and left zygomaticomaxillary suture were performed in the coronal section.

The outermost point of the suture, rather than the innermost point, was selected as the latter was not always visible.

In Table I , the abbreviations of all measurements performed are shown.

Table I
Abbreviations of measurements

In this study, after the active expansion phase, all appliances were kept as a retainer for 8 months.

The sample size for this study was calculated on the basis of the following formula:

These values have been chosen on the basis of a previous similar paper. Applying the values described above, the following result was obtained:

According to the formula above, a choice of 10 subjects per arm can be viewed as reasonable.

Descriptive statistics, including mean values and standard deviations, were used for the statistical analysis. A database was created using Excel (Microsoft, Redmond, Wash), with appropriate checks to identify errors.

All measurements were performed twice, within a monthly interval, by the same calibrated examiner (F.A). To calculate the intraoperator reliability, all measurements were repeated by the same examiner (F.A) after 4 weeks, and the differences were evaluated using a 2 sample t test. The levels of significance were set at P ≤0.05. The difference was not statistically significant ( P ≤0.05), demonstrating intraoperator reliability. Statistical analyses were performed, taking into account the mean of the 2 measurements. The independent Student t test was used to compare the mean differences between the groups. The level of significance was P ≤0.05.

A total of 36 subjects were included in the study and treated (16 females [44%] and 20 males [56%]). The age of the study population ranged from 10.1 years to 13.6 years (mean, 12.3 years; standard deviation, 0.82 years). The study population was randomly allocated into 2 groups (group A and B). Eighteen subjects (mean age, 12.2 years; male-to-female ratio, 10:8) were assigned to receive treatment with the hyrax appliance (group A), and 18 subjects (mean age, 12.3 years; male-to-female ratio, 11:7) were treated with the computer-guided miniscrew-supported RME appliance (group B). Ten subjects (4 in group A; 6 in group B) were censured as the posttreatment CBCT was not performed (6-month follow-up) for coronavirus disease 2019 pandemic.

Therefore, the comparison of skeletal, dentoalveolar, periodontal, and airway changes was performed on a sample of 26 patients. Baseline characteristics, including age and sex, were similar in the 2 groups ( Table II ).

The measurements of skeletal, dentoalveolar, periodontal, and nasal floor changes on the pretreatment and posttreatment CBCT are shown in Table III . This Table describes the average differences between the pretreatment (T1) and the 6-month retention period (T2) measurements and the standard deviation for each investigated parameter. The mean values of the 2 groups were then compared using the t test and the comparison determined statistically significant differences in some parameters.

An increase in the measurements of all the investigated dentoskeletal structures was observed in both groups; the maxillary basal width had an average increase in group A of 2.8 mm, whereas in group B the average increase was 6.79 mm, with a statistically significant difference between the means of the 2 groups of approximately 4 mm ( P = 0.02). The width of the nasal base also increased in both groups, with group B showing a statistically significant increase of >2 mm ( P < 0.01).

The maxillary alveolar width was increased on average by >5 mm in both groups. Regarding the distance between the zygomatic-maxillary sutures, this value increased in both groups (group A, −4.80 ± 1.57; group B, −8.15 ± 1.38), but the increase was greater in the group with skeletal expander with a statistically significant difference of 3.35 mm ( P < 0.01).

The intermolar width (at coronal and apical levels) increased in both groups by approximately 5 mm ( Table III ).

Regarding the maxillary first molar inclination, a different behavior was noted in the 2 groups. The intermolar angle changed on average by about 6° during the treatment in group A. In contrast, it remained almost unchanged in group B (−0.17 ± 3.54) with a statistically significant difference between the 3 groups ( P = 0.02).

The measurements of the maxillary right and left molar inclination also changed more in group A with a statistically significant difference between the 2 groups (MolR°, P = 0.04; MolL°, P = 0.02).

Concerning periodontal changes, measurements at the level of the buccal and oral cortical plate of the maxillary first molar recorded a minimal variation between before applying the RME device and the 6-month retention period (0.3 mm in group A and 0.15 mm in group B); however, measurements at the level of the right buccal cortical plate were statistically significant (MBR, P = 0.02; DBR, P = 0.02).

Understanding orthodontists’ decision making in relation to innovations from encounter to implementation: A qualitative study

Adolescents’ perception of malocclusion, their motivations, and expectations concerning the orthodontic treatment. Is it all about attractiveness? A qualitative study