The long duration of orthodontic treatment is a major concern for the patient. This study aimed to evaluate the efficacy of pulsed electromagnetic field therapy (PEMF) in accelerating the orthodontic tooth movement, thus reducing treatment duration.

Nineteen patients requiring extraction of first premolars were selected for this study. The study design was randomly assigned (sealed envelope randomization) split-mouth design. The rate of individual canine retraction by a nickel-titanium closed-coil spring was done. The experimental side received a PEMF generated by a circuit powered by a watch battery. The circuit was embedded in a removable appliance. Foil was used to obstruct the control side from PEMF exposure. Patients were instructed to wear the appliance for 8-10 hours. Appliance with the device was given from the commencement of canine retraction until the canine retraction of one side was complete. Tooth movement was measured on progress models.

An average increase of 31% in the rate of tooth movement was observed with the PEMF.

PEMF is a good option to reduce orthodontic treatment duration.

A major concern to orthodontic patients is treatment time. Generally, the time required for fixed appliance treatment is 20-30 months. With a long treatment time, there is an increased risk of root resorption, gingival inflammation, and dental caries. Hence, to shorten the treatment time and limit the side effects of orthodontic treatment, several methods to accelerate the tooth movement have been reported in the literature.

Corticotomy, a surgical approach, dates back to 1959. Other surgical methods include piezocision, corticision, microosteoperforations, and interseptal alveolar surgery. Studies have shown that surgical procedures such as corticotomy and piezocision can accelerate tooth movement up to 33%. However, their application has been limited by their aggressiveness. Local drug injection has been used since 1984 to accelerate orthodontic tooth movement and has shown successful results. However, these drugs have undesirable side effects such as local pain and discomfort during the injection. Treatment approaches that have recently received attention involve the device assisted approach (noninvasive methods), which include electromagnetic field, laser beams, electrical currents, and vibrations that demands application for the long term to achieve its therapeutic effects. Electric stimulation and resonance vibration have been tried, but these methods require an apparatus not routinely used in dental practice.

Pulsed electromagnetic field (PEMF) therapy is a noninvasive, nonthermal treatment that involves pulsing electromagnetic fields in tissue to promote healing by increasing blood circulation. Electromagnetic field devices have been used therapeutically for more than a century and various applications in the medical field. In 1978, Bassett first applied noninvasive PEMFs to treat delayed union or nonunion fractures and have achieved good clinical effects. Shortly after that, PEMFs were approved as a safe and effective method for treating delayed union or nonunion fractures by the U.S. Food and Drug Administration. , These low-powered PEMF devices were termed bone growth stimulators and approved by the U.S. Food and Drug Administration for human use. , bone growth stimulators therapy is a long-term treatment, often used for ≥8 h/d for several months. It has been used to treat osteoarthritis by relieving pain, edema, and inflammation. Clinical studies have also shown that PEMF accelerates the healing of chronic wounds by growing new blood vessels. However, its use in the dental field has been limited.

The sample size was determined by using Epi Info software. With a permissible error of 5% using a split-mouth design, a sample size of 15 was sufficient for the study to have 80% power and be clinically significant. An additional 4 patients were included in the study to exclude the dropouts, if any. However, there were no dropouts in the study, and the total sample size consisted of 19 patients.

The study design was approved by the institutional ethics committee (no. MUHS/PG-T/E1/2134/2017). Routine orthodontic diagnostic records were collected and analyzed for all subjects. The treatment plans for these patients included extraction of maxillary and mandibular first premolars to meet the space requirements for the retraction of anterior teeth. A randomly assigned (sealed envelope randomization) split-mouth design prevented interindividual biologic variation. In each patient, the extracted right and left quadrants were randomly divided into 2 groups. Group 1 was the control side quadrant that did not receive PEMF therapy. Group 2 was the experimental side quadrant that received PEMF therapy.

After explaining the study to the patient, informed consent was taken from the patient before the start of the study. On day 7, after the extractions, separators were placed mesially and distally to the first molars for band placement. After 2 days of separator placement, molar bands (0.180 × 0.005-in) were custom made. Triple molar tubes were welded on the buccal surfaces of maxillary molar tubes, and double molar tubes were welded on the buccal surface of mandibular molar bands. Maxillary and mandibular bands were cemented with glass ionomer luting cement (D-tech, Pune, Maharashtra, India).

Preadjusted edgewise MBT brackets (Ortho Organizers, Carlsbad, Calif) of 0.022-in slot were bonded with Transbond XT (3M Unitek, Monrovia, Calif), and curing was done with a light-emitting diode (Dentsply International, York, Pa). Alignment and leveling were initiated with 0.016-in heat-activated nickel-titanium (NiTi) wire, and the later sequence of wires was 16 × 22-in NiTi, 17 × 25-in NiTi, 17 × 25-in stainless steel (SS), and 19 × 25-in NiTi. After alignment and leveling 19 × 25-in SS (Orthoforce; G&H Wire, Franklin, Ind), a final working wire was placed. Temporary skeletal anchorage device microimplant (SK Surgicals, Pune, Maharashtra, India) measuring 1.3 × 9.0 mm was inserted between maxillary second premolar and first molar for absolute anchorage. After 21 days of 19 × 25-in SS wire placement, the individual canine retraction was started with a NiTi closed-coil spring (G&H Wire) with direct anchorage from a temporary skeletal anchorage device. The incisors were consolidated by using 0.009-in steel ligature wires. A constant 150 g of force was used for canine retraction on both the control and experimental sides. To maintain 150 g of force in all patients despite the different widths of available extraction spaces, accurate spring selection was done using the manufacturer’s guide. The NiTi closed-coil spring system (G&H Wire) kit contains springs of 9 mm and 12 mm in length. Again they are subdivided into feather-light, extralight, light, medium, and heavy forces. The measuring gauge supplied by the manufacturer with the spring kit has a hole to simulate the eyelet of the spring. This hole is slipped over the canine hook; the closest landmark to the molar hook shows the recommended spring size to be selected to achieve 150 g of force. The spring was positioned from the implant head to the power arm of the canine bracket, and to prevent dislodgment of the spring, it was also secured with a ligature tie. The exerted force value was confirmed with an orthodontic dynamometer. Patients were asked to report immediately if the spring dislodged or broke; it was then replaced.

PEMF therapy was started on the selected experimental side on the same day of placement of the coil spring. The device is an integrated circuit powered by a watch battery (designed and calibrated by an electrical engineer) embedded in an acrylic maxillary removable appliance ( Fig 1 ). Two wires extending from the circuit were placed closed to the experimental canine (such that the canine is between these 2 wires). The device (along with the wires) was embedded completely in acrylic and was placed close to the experimental group canine. The appliance was retained with the help of 4 ball end clasps—1 on each side between the maxillary central and lateral incisor and 1 on each side between the maxillary second premolar and first molar. To avoid any stimulation of the control group canine, aluminum foil was placed in the midline of the removable appliance ( Fig 2 ). The external field causes the electrical charges in the aluminum to align themselves so that it cancels out the electromagnetic field’s effect on anything behind it. This principle is illustrated by the famous scientific creation called the Faraday Cage. So a PEMF of 0.5 mT, 1 Hz was induced only to the nearby canine close to the coil, generating PEMF. Intraoral view of the appliance. 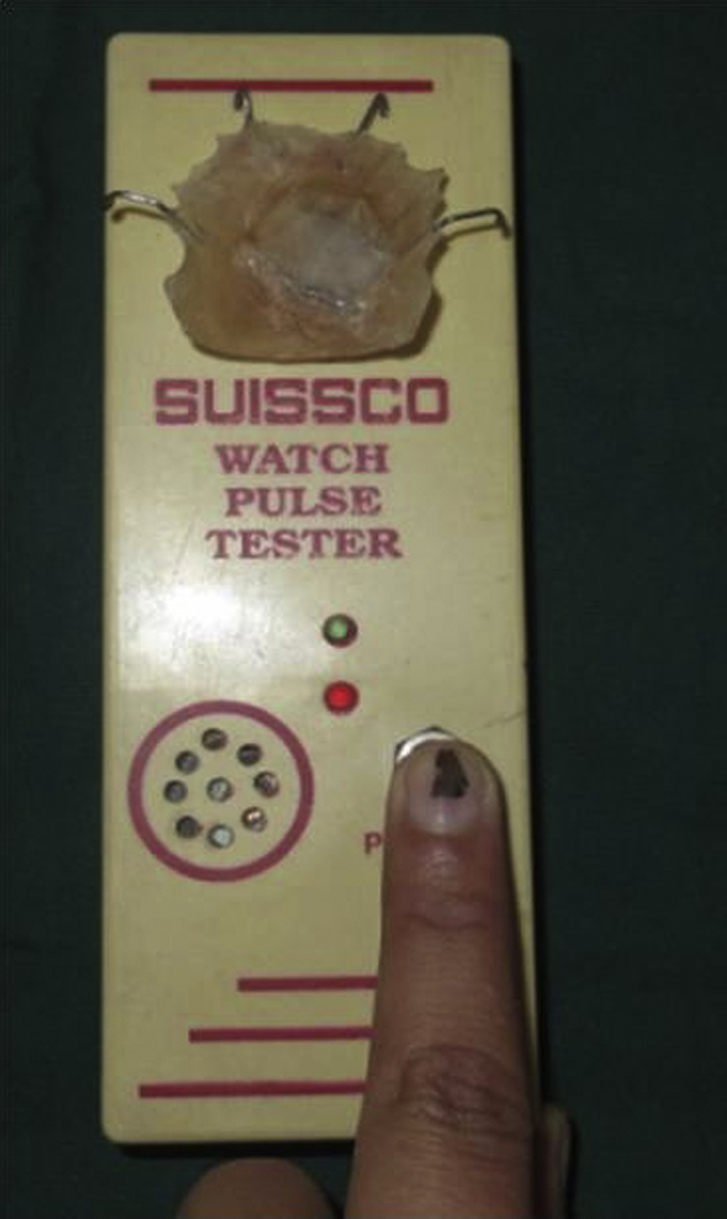 Three models were made for each patient. On the models, the mesial cusp tips of the first molar and the canine were the reference points. The measurement recorder was blinded about the control and experimental sides. The distance between the first molar and the canine was measured on all 3 models for each patient with a digital caliper (Aerospace, Shanghai, China) accurate to ± 0.02 mm. These distances were recorded after (1) alignment and leveling: day 1 of canine retraction (T0); (2) 3 months of canine retraction (T1); and (3) completion of canine retraction on the experimental side (T2). Descriptive statistics are presented in Table I . Difference between T0 and T1 represented the amount of tooth movement over 3 months ( Table II ). The rate of orthodontic tooth movement was calculated as the amount of tooth movement per unit time. The rate of orthodontic tooth movement at the end of 3 months (M1) was recorded as follows: M1 = (T0 – T1)/3.

The rate of orthodontic tooth movement on completion of canine retraction (M2) on the experimental side was recorded as follows: M2 = (T1 – T2)/n months . M1 and M2 readings were calculated for both the experimental and control sides and compared ( Table III ).

Dahlberg error, D, is defined as:

∑d 2 is the sum of the squared differences between recordings, and n is the number of duplicate measurements. This difference was within 0.05 mm; this was not statistically significant ( Table IV ).

Master sheets were prepared to facilitate the analysis of the data. The data were tabulated and analyzed by SPSS statistical software (version 21.0; IBM Corp, Armonk, NY). For the descriptive statistics, mean difference, standard deviation, and standard error were calculated for all variables ( Table I ).

The paired t test was used to compare the variables within the groups. One-way analysis of variance ( F statistic) was used for comparing the distances at T0, T1, and T2 in both groups. Multiple comparisons were made with the Bonferroni test. After analysis, the data were sorted into various tables on the basis of the objectives of the study. The results are expressed as levels of significance. Significance was determined at the 0.05 and 0.01 levels of confidence.