The predicted distal movement of the maxillary first molar ( P <0.0001) and maxillary second molar ( P <0.0001) differed significantly from the actual values. There was a statistically significant correlation between the amount of distal molar movement and the amount of anchorage loss (r = 0.3900, P <0.008) for the central incisor, and (r = 0.3595, P <0.013) for the lateral incisor.

Invisalign can be used successfully for adult patients requiring maxillary molar distalization when a mean distalization movement of 2.6 mm was prescribed. Clinicians should be aware of the countereffect if maxillary molars are planned to move distally, especially if the patient presented initially with a large overjet, so the need to prescribe overcorrection or the use of auxiliaries can be addressed earlier.

Invisalign has attracted the attention of orthodontic professionals to offer an esthetic, less invasive, and more hygienic choice for patients seeking orthodontic treatment. In 1946, Kesling was the first to propose using a series of clear aligners to straighten the teeth as a refinement method at the end of traditional orthodontic treatment; since then, the idea has evolved, and Align Technology (Santa Clara, Calif) launched the Invisalign system in 1999 to the orthodontic market with the aid of computer-aided design/computer-aided manufacturing stereolithographic technology and tooth movement simulation software “Clincheck” (Align Technology) to plan the treatment and produce a set of custom-made, clear thermoplastic removable aligners from a preliminary impression or oral optical scan. The planned tooth movement that a single aligner can produce is approximately 0.25 to 0.33 mm every 14 days, with 22 hours of wearing time per day.

At first, aligners were marketed as an alternative to traditional fixed appliances in simple malocclusion cases such as slight crowding or minor space closure. As Invisalign company continues to develop its technology and products, it has been used successfully in some complex cases, such as those requiring extractions, open bite, and Class II malocclusion recently. Different attachment designs and new auxiliaries, such as power ridges and precision cuts, were implied to allow additional treatment objectives. This advancement allows more adults to be involved in orthodontic treatment. According to the manufacturer, Invisalign can perform major tooth movements effectively, such as molar distalization up to 4 mm. The best accuracy is achieved when the movement is supported by an attachment on the tooth surface, and staging is an essential aspect of the treatment plan.

Using clear orthodontic aligners for maxillary molar distalization was reported to ensure excellent vertical dimension control, representing another solution for treating subjects with hyperdivergent or open bite ; in addition, it has been reported to be used successfully in Class II malocclusion, but the extent of the distal movement with Invisalign remains questionable among orthodontists. Boyd and Vlaskalic reported more than 3 mm of maxillary molar distalization in a patient with a Class II Division 2 malocclusion that could be achieved. In controversy, Djeu et al and Clements et al reported difficulty with large anteroposterior movements using Invisalign.

To evaluate Invisalign efficiency, different methods have been used, such as the American Board of Orthodontics objective grading system, peer assessment rating systems, cone-beam computed tomography, cephalometric evaluation, and superimposition of pretreatment and posttreatment digital models over stationary posterior teeth. ,

The use of 3-dimensional technology has already become indispensable to modern dentistry and has increased in recent years. The introduction and development of the intraoral scanner and related software have transformed diagnosis and treatment planning from a traditional 2-dimensional approach into a more advanced 3-dimensional technique, allowing for evaluation of treatment progress and the outcome more efficiently ever than before with a high precision of measurements, besides protecting the patients from the undue exposure to radiations.

Digital model superimposition opens a new horizon for evaluating treatment outcomes with ease and reliability at any specific time point. The ability to evaluate the amount of tooth movement and obtain numerical values provides the clinicians with an overview for grasping the mode of treatment. To perform that, reproducible and relatively stable anatomical landmarks on the dental model are essential to identify to ensure the correct superimposition of pretreatment and final plaster or digital models for precise measurements of treatment outcomes. , The palatal rugae area has been reported as a relatively stable and reproducible structure for the registration of serial maxillary models. ,

For this purpose, the amount of maxillary molar distal movement predicted by Clincheck software was compared with the achieved amount at a specific treatment time point using digital model superimposition and inspection. Furthermore, the effect of attachments, as well as the amount of anterior anchorage loss, were evaluated. This inquiry area is crucial because it helps professionals decide the right treatment modality choice for their patients and decrease the chances of undesired effects if any tend to happen.

This prospective study was ethically approved by the Stomatological Hospital of Xi’an Jiaotong University Medical ethics committee (No. 45). The sample comprised 142 maxillary molar teeth (71 first molar, 71 second molar) measured from the digital models of 38 participants (4 male, 34 female). Each patient was treated with only Invisalign in the Department of Orthodontics at Stomatological Hospital of Xi’an Jiaotong University, Xi’an, Shaanxi, China, under the guidance of experienced orthodontists who were certified in Invisalign treatment. Participants’ mean age was 25.4 years (range from 17 years to 39 years). The mean number of aligners used to achieve molar distalization movement was 20 aligners, and the average time between the initial and final scans was 6.7 months (range from 3.3 to 11 mo). Tooth attachments varied in position, shape, and size, according to the doctor’s prescription, and the frequency of attachments was 80 of 142 teeth (56.3%).

The patient selection inclusion criteria were as follows: (1) adult patients qualified for Invisalign treatment with no previous orthodontic treatment; (2) requiring maxillary molar distalization during treatment; (3) absence or previous extraction of maxillary third molars; (4) Class II intermaxillary elastics and auxiliaries other than Invisalign attachments could not be used during the molar distalization process; and (5) good-quality initial digital model, including clear palatal rugae landmarks.

The patients were instructed to wear the aligners 22 hours a day and change aligners every 10 days after the manufacturer’s protocol. The patients understood that they were part of a research study at the delivery appointment, and compliance was also verbally confirmed at each appointment.

The predicted tooth movement obtained from the Clincheck tooth movement table provided with the virtual treatment plan for each patient, whereas the actual pretreatment model and the final stage model of each patient were acquired using the iTero Element 2 intraoral scanner (Align Technology) and exported from orthoCAD software (Align Technology) as STL files. Actual models were then imported into the GOM inspect suite software 2020 (GOM; Braunschweig, Germany) for superimposition, inspection, and measurement. Using the local best fit function for the digital model alignment, the initial models were superimposed over the final stage models by selecting the palatal rugae area, and alignment was performed as shown in Figure 1 . After superimposition and inspection, the center of tooth mass of the first and second molars was constructed over the 2 models by selecting the tooth area intended to be measured. Then the measurement principles were applied, and the 2 points of the same tooth were linked together to show the result ( Figs 2 , A , B , and C ). 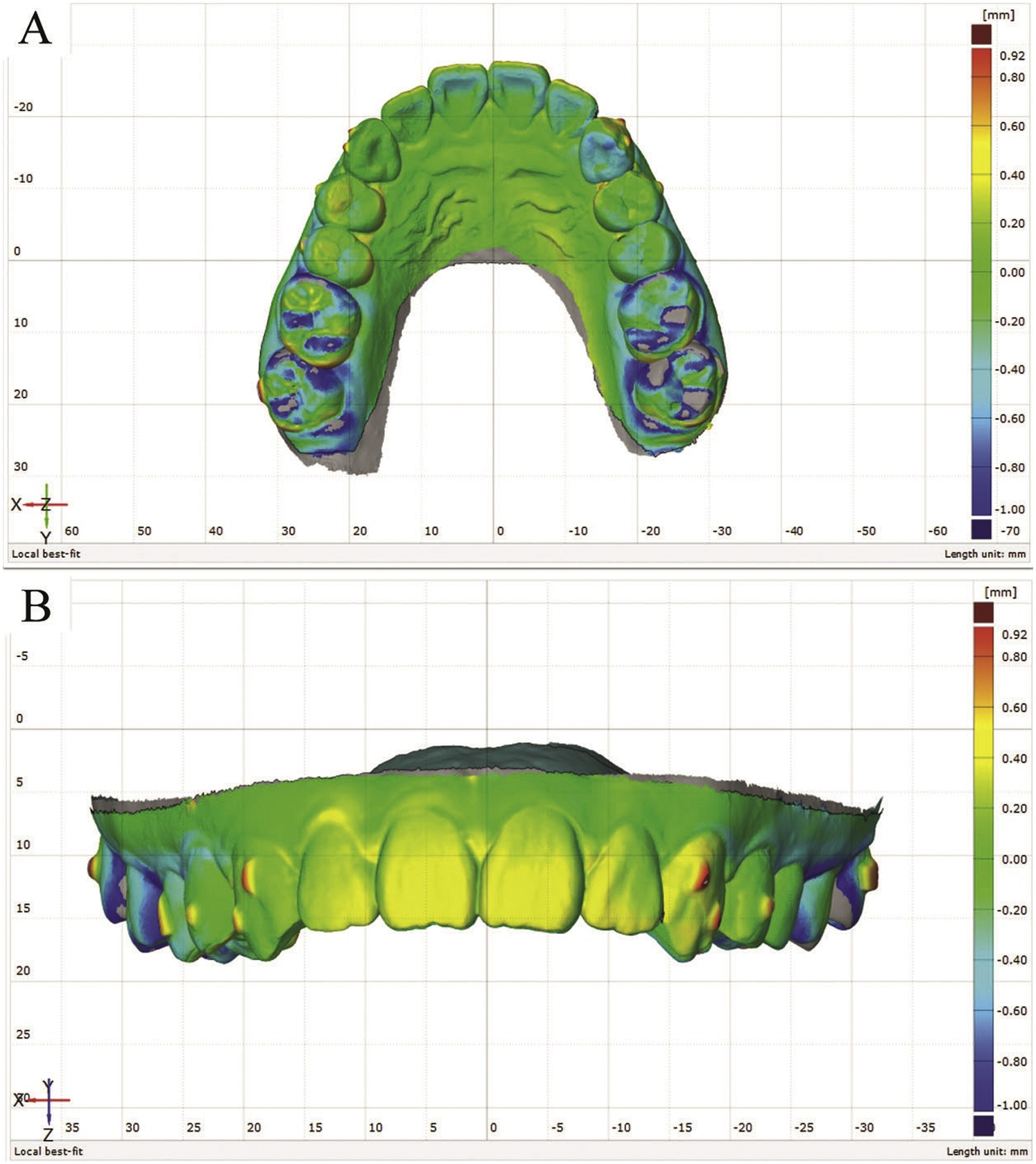 A, Inspection after superimposition. B, The yellow marks on the anterior teeth are signs of anterior anchorage loss. Using SPSS software (version 22; IBM Corp, Armonk, NY) for the statistical analysis, evaluation of the findings included the analysis of the measured values as well as means, medians, and standard deviation. According to the Shapiro-Wilk test, the data were non-normally distributed; hence the nonparametric equivalents were used for statistical analysis.

The differences between clinically achieved tooth movement and Clincheck predicted tooth movement values in each group (first molar, second molar) and subgroup (a: with attachment, b: without attachment) were determined using Wilcoxon signed-rank tests. The significance level of difference between groups was set at P <0.05. At the same time, the Spearman signed-rank test was used to evaluate the nature of the relationship between the maxillary molar distal movement and the anterior anchorage loss.

The percentage of treatment accuracy for achieved distal movement was calculated using the following equation: percentage of accuracy = 100% − [(predicted-achieved)/predicted) × 100%].

A total of 142 maxillary molars (71 first molar, 71 second molar) were investigated for accuracy of distal movement, and 228 anterior teeth were evaluated for anterior anchorage loss.

The mean, median, and standard deviation of the predicted Clincheck and achieved maxillary molar distal movement are reported in Table I . The outcomes of the Wilcoxon signed-rank test used to show the difference between the achieved and predicted values are presented in Table II . The predicted distal movement of the maxillary first molar ( P <0.0001) and maxillary second molar ( P <0.0001) significantly differed from the achieved values.

Wilcoxon signed-rank test in Table III also show nonsignificant differences between the achieved maxillary molar distal movement with and without the use of attachments ( P = 0.552) for maxillary first molar and ( P = 0.941) for maxillary second molar.

Table III
Wilcoxon signed-rank test used to examine the differences between achieved maxillary molar distal movement with attachments and without the use of attachments
SD, standard deviation.

A line graph explains the correlation between the achieved amount of distal molar movement and the amount of anterior anchorage loss.

Accuracy of the Demirjian, Willems and Nolla methods for dental age estimation in a northern Chinese population