A double J retractor and palatal miniscrews were applied to retract maxillary anterior teeth without brackets after repeated periodontal flare-ups. The line of action passing through the center of resistance of maxillary anterior teeth and the moment generated by palatal miniscrews via torquing springs successfully controlled the overbite and incisor torque during space closure. In addition to en-masse retraction without brackets, it is also possible to combine this setup with labial fixed appliances or clear aligner treatment.

A patient was reported to emphasize the importance of periodontal evaluation before orthodontic treatment and illustrate the rescue in space closure without brackets on the maxillary arch after periodontal flare-ups. A double J retractor (DJR) with torquing springs was bonded on maxillary anterior teeth for en-masse retraction.

The DJR was a modified lingual retractor with torquing springs to further enhance the incisor torque control during en-masse retraction of maxillary anterior teeth. Palatal miniscrews were installed for maximal anchorage control and activation of the torquing springs for incisor torque control. This article aimed to report a possible solution for maxillary anterior retraction without brackets. In addition, the biomechanical control of incisor torque during space closure will be discussed.

This 24-year-old woman presented with a chief complaint of severe dentoalveolar protrusion and chin retrusion. Clinical examination revealed a convex facial profile with a retruded chin and relatively thick lips. A mentalis strain was noted on lip closure. Her nasolabial angle was around 90°, with perioral protrusion. Vertical facial proportions were within normal limits. The right half of her face was slightly larger than the left half. Her chin point deviated to the left about 5 mm. The maxillary dental midline was coincident with the facial midline, but the mandibular dental midline was off to the right by 1.5 mm. The maxillary arch displayed minor crowding, about 1 mm, whereas the mandibular arch displayed a 3 mm arch length discrepancy. Bilateral molar and canine relationships were Class I. Overjet and overbite were both 3 mm. The lateral cephalogram revealed a skeletal Class II relationship (ANB, 6°) and high mandibular plane angle (SN-MP, 40.2°). Maxillary incisors were upright (SN-U1: 100.2°), and mandibular incisors were proclined (L1-MP, 107°), typical dental compensations to skeletal Class II relationship. The panoramic radiograph showed 2 maxillary third molars impacted in high positions. Mild periodontal attachment loss was noted. The diagnosis for this case was skeletal Class II relationship, dental Class I malocclusion, high mandibular plane angle, and dentoalveolar protrusion with a retruded chin. ( Figs 1-3 , Table I ) 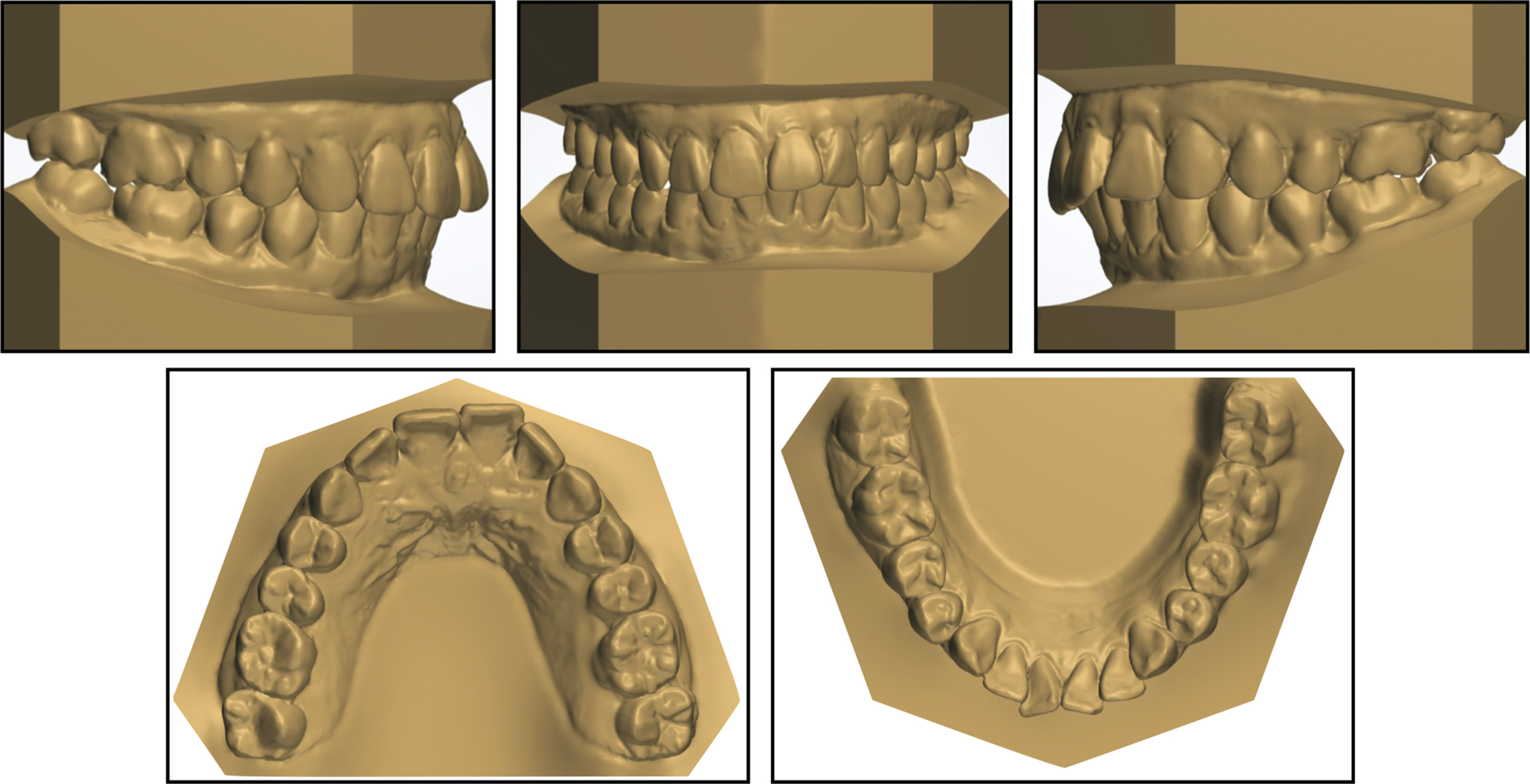 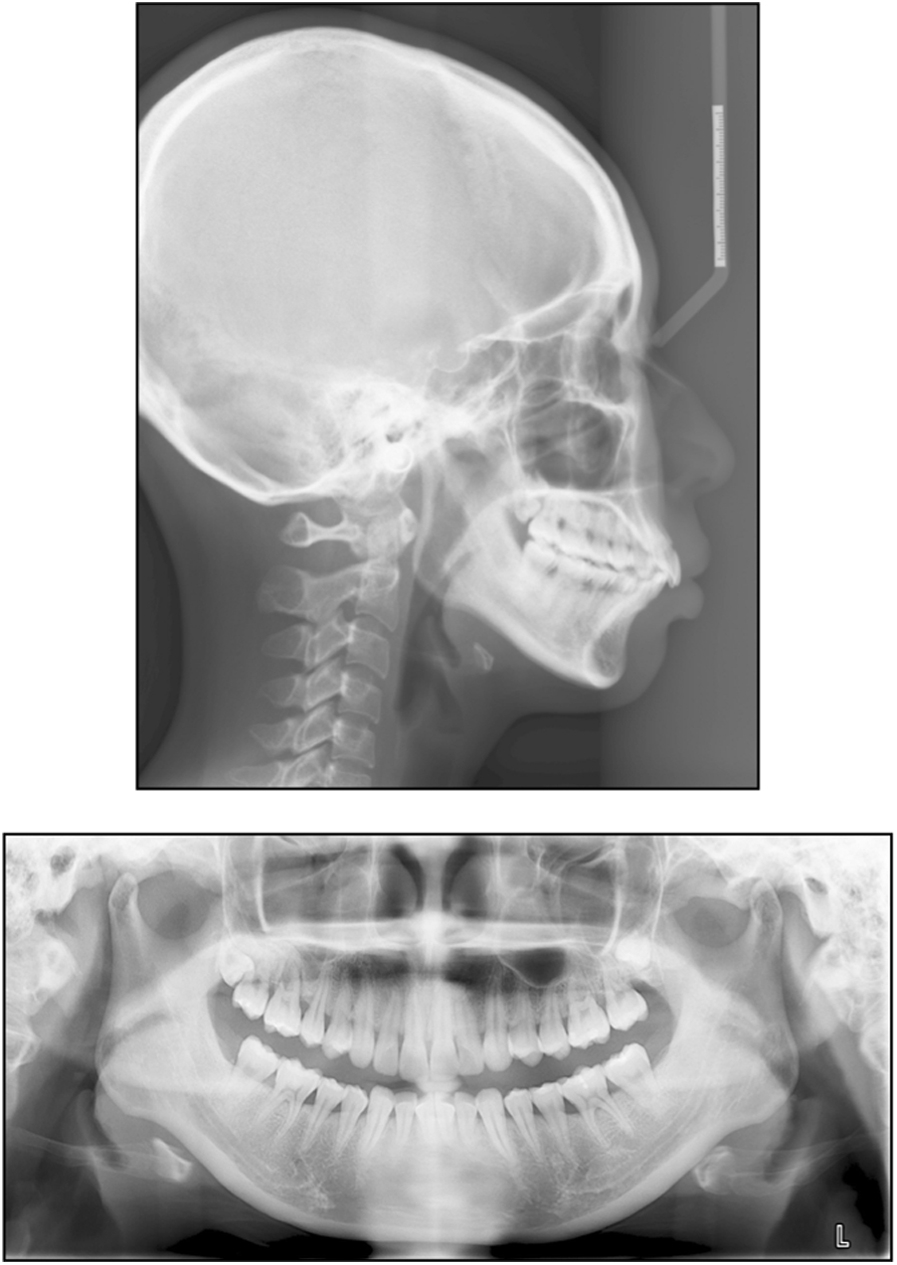 The treatment objectives include alignment and leveling of both arches, ideal overjet and overbite, solid interdigitations at molar and canine Class I dental relationships, and maximal retraction of maxillary and mandibular incisors for profile improvement. Care should be taken on vertical control so as not to rotate the chin point clockwise during retraction. To maximize the profile improvement with thick soft tissues, anchorage should be reinforced for maximal retraction if the orthognathic surgery was declined. Torque control of maxillary incisors should be carefully monitored during space closure as the maxillary incisors were upright and the crowding was minimal.

The ideal treatment plan for this patient was orthognathic surgery combined with orthodontic treatment. Four-premolar extractions and anterior subapical osteotomies for profile reduction and bilateral sagittal split osteotomy for mandibular advancement to correct skeletal Class II were suggested. A genioplasty might be necessary to improve the chin projection and coincide the chin point with the facial midline. However, the patient declined the surgical approach. The treatment alternative was 4 first premolar extractions and space closure to reduce the dentoalveolar protrusion. The patient was informed of possibly insufficient profile improvement considering less soft tissue response because of her thick lips. Temporary skeletal anchorage devices (TSADs) would be considered for anchorage reinforcement to maximize incisor retraction and profile reduction. The patient accepted TSADs and understood the limitations of orthodontic treatment without orthognathic surgery.

A modified Alexander prescription was used. The slot size for the anterior teeth (canine to canine) was 0.018-in and 0.022-in for the posterior teeth. The initial archwire for the maxillary arch was 0.016-in nickel-titanium (NiTi) archwire. Two miniscrews (A1-P, 2×10 mm; Bioray Biotech corporation, Taipei, Taiwan) were installed bilaterally on the buccal alveolar bone between the maxillary second premolar and first molar for maximal retraction. Elastic chains were attached from the miniscrews to the maxillary canines for canine retraction. Two weeks later, mandibular brackets were bonded with the initial wire of 0.016-in NiTi archwire ( Fig 4 ).

An emergency appointment occurred 2 weeks after mandibular bonding because of a periodontal abscess of the maxillary right first molar ( Fig 5 ). The patient was referred to the periodontist. The diagnosis was localized periodontitis, with Stage III, Grade C, buccal Class II furcation involvement of maxillary right first molar. Scaling and root planning with adjunctive local subgingival Periocline gel (Minocycline 2%) application were performed for periodontal maintenance. Periodontal problems continued to recur, off and on, for the next 6 months. Therefore, we decided to remove the molar tubes. Two months later, the patient requested the removal of all the remaining maxillary brackets and miniscrews for periodontal care ( Fig 6 ). A periapical radiograph showed furcation involvement which led to a periodontal abscess after initial strap-ups.

After periodontal management, all the maxillary appliances were requested to remove, including braces and miniscrews.

The mandibular archwire was changed to 0.016 × 0.022-in stainless steel wire (SSW) in the fourth month. However, space closure in the mandibular arch was not begun as there was no appliance on the maxillary arch. Lingual braces or clear aligners were considered. Considering the cost and the torque control of the maxillary incisors during space closure, a technique suggested by Park et al that used a DJR and palatal miniscrews was considered and accepted ( Fig 7 ). The final design of the DJR was more similar to that reported by Jang et al ( Fig 8 ).

Force system design used by Park to retract dentition without braces. The DJR with helical torquing springs was supported with Class II elastics for torque control. A midpalatal miniscrew and 2 miniscrews on palatal slopes of the maxillary first molars were used as anchorage to retract anterior teeth.

Force system following Jang’s design in a finite element study. In addition to the similar lever arms extended high up to the level of center of resistance of the anterior teeth, the helical torquing springs rested along the palatal miniscrews located between the maxillary second premolar and first molar around 8 mm from the gingival line.

A 0.036-in SSW was used to fabricate the DJR, with the lingual arch adapted to the lingual surface of the 6 maxillary anterior teeth and then bent at the canines to form helical torquing springs extending to the first molar area. The helical torquing springs were designed to rest against the palatal miniscrews on the occlusal sides, thus preventing the anterior teeth from retroclining during retraction. Two lever arms were bent to adapt to the palatal slope, at approximately the height of the estimated center of resistance (12.2 mm from the incisal edge of the maxillary central incisors), and then soldered to the lingual arch at the center of the lateral incisors. The lingual arch was sandblasted before bonding at the center of the lingual surfaces of the maxillary anterior teeth.

The DJR and palatal TSADs were delivered in the ninth month. Space closure proceeded in the maxillary arch with this segmental technique, whereas sliding mechanics were employed in the mandibular arch on a 0.016 × 0.022-in SSW. After 12 months of space closure, the extraction spaces were almost closed ( Figs 9 and 10 ). The patient was persuaded to have maxillary braces placed for detailing and finishing. The maxillary brackets were bonded at the 25th month, and the DJR was removed simultaneously ( Fig 11 ). All the fixed appliances and TSADs were removed after 13 more months of finishing and detailing.

The space closure with a DJR and palatal miniscrews was smooth. It was almost complete after 12 mo of space closure. 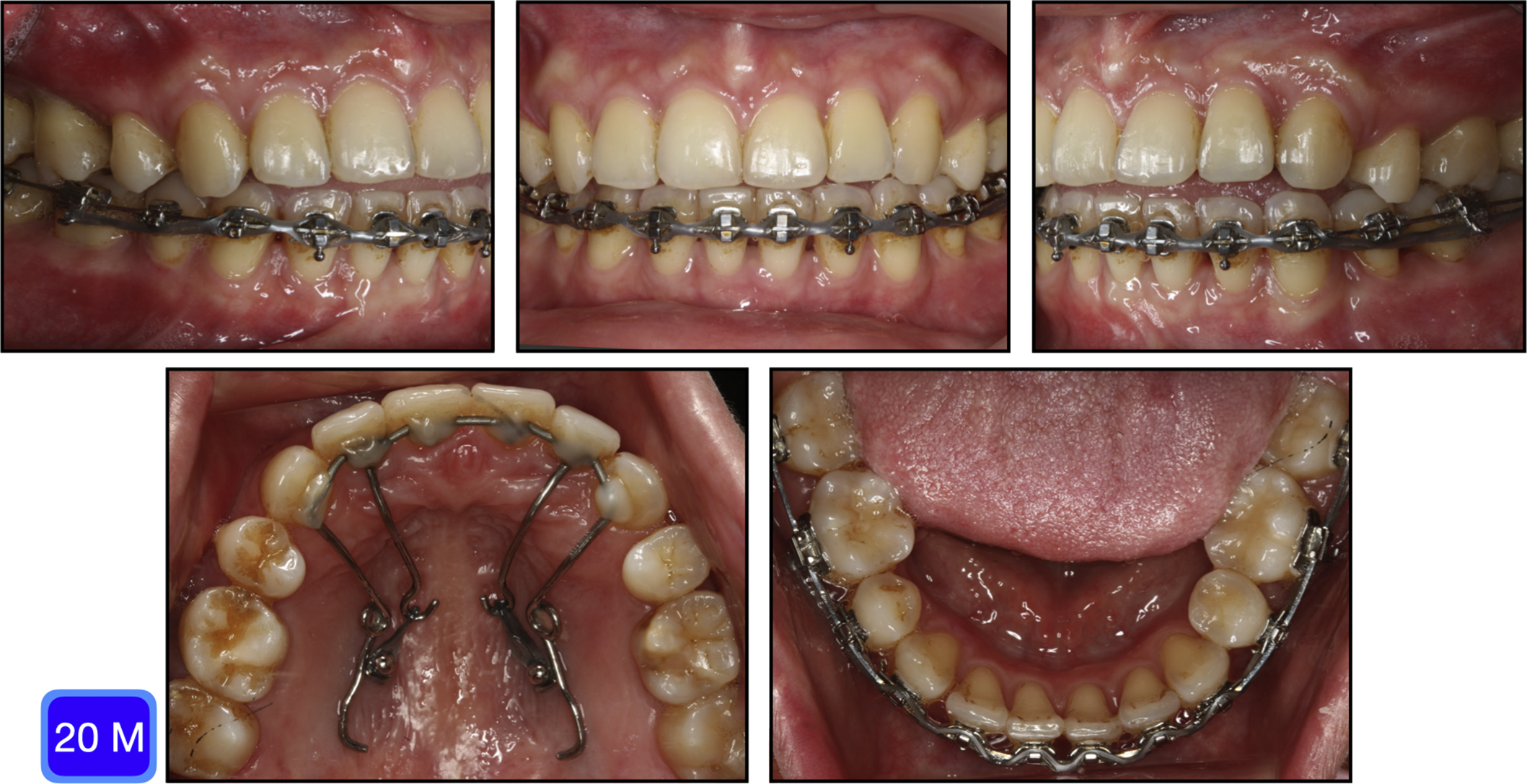 Intraoral photographs after 12 mo space closure with a DJR and palatal miniscrews. 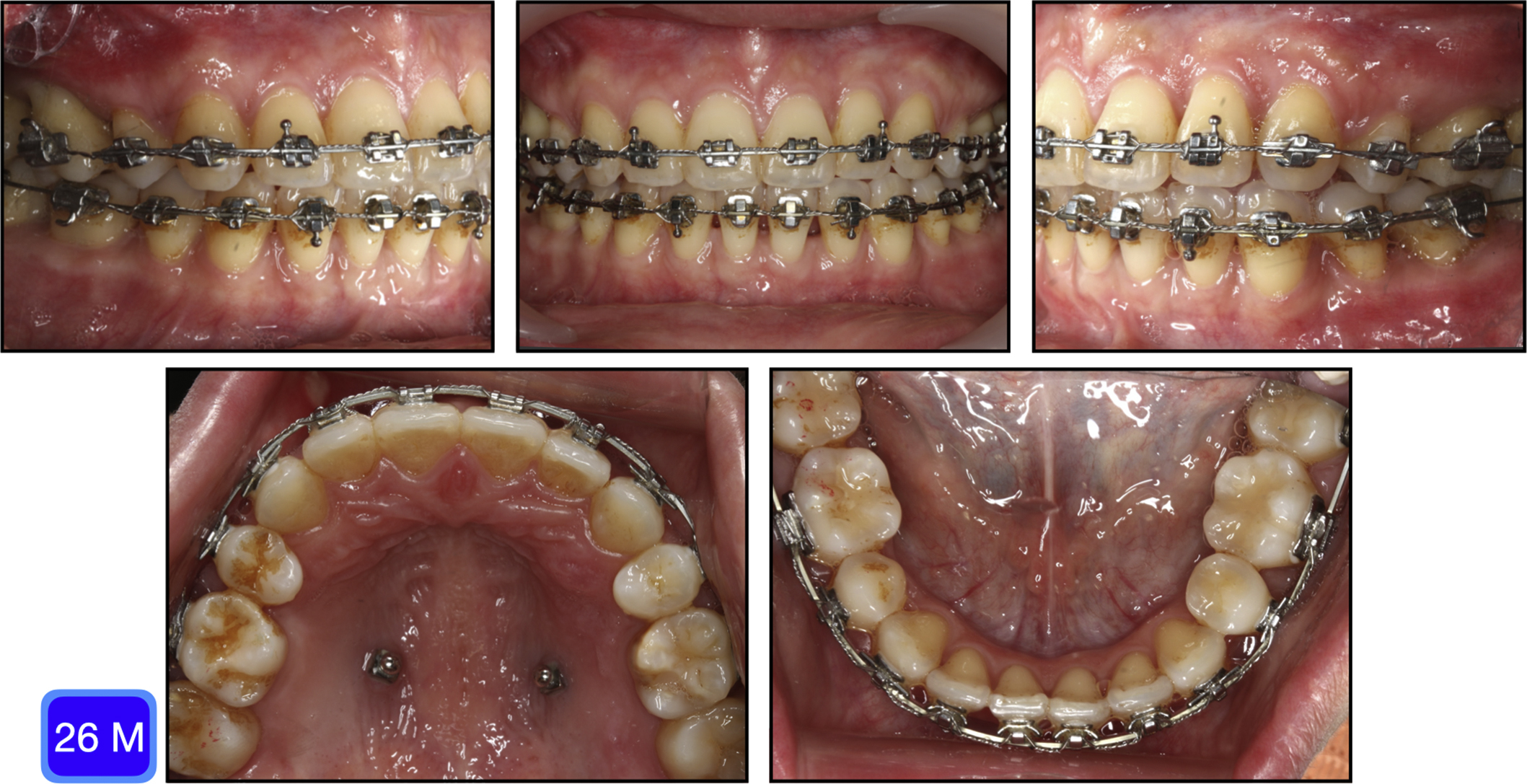 One mo after maxillary bracket rebonding for final detailing and finishing.

The total treatment time was 38 months. Solid molar and canine Class I relationships were achieved with ideal overjet and overbite. The protrusion was significantly reduced ( Figs 12-14 ). The patient was satisfied with the treatment outcome. The cephalometric superimpositions ( Fig 15 ) showed maxillary incisor retraction of 7 mm and maxillary incisor intrusion of 1.5 mm. Maxillary first molars were extruded 1 mm. Mandibular incisors were retracted 4.5 mm and intruded 3 mm. Mandibular first molars were mesialized 1.5 mm. The torque control of the maxillary incisors during retraction was good. The mandibular incisors were uprighted from 107° to 95.1°. The axial inclination of maxillary incisors was reduced by 4.1°. (U1-SN: pretreatment, 100.2°; posttreatment, 96.1°). Maxillary and mandibular fixed retainers were bonded. Vacuum-formed clear retainers were delivered, and the patient was instructed to wear them full-time for the first six months and then only at night after that point. Continued periodontal follow-up and evaluation for the possibility of regeneration therapy were suggested. Comparison of 3-dimensional printing technologies on the precision, trueness, and accuracy of printed retainers