Cone-beam computed tomography (CBCT) gives orthodontists and other dental clinicians 3-dimensional information for planning treatment in the craniofacial region. Often overlooked are incidental findings outside the treatment region of interest.

Two patients with incidental findings of skull-base abnormalities are presented. The orthodontic patient was tentatively diagnosed with a notochordal remnant in the clivus; the implant patient exhibited an empty sella turcica.

Orthodontists and implant surgeons may come across incidental findings outside their area of expertise on CBCT scans, highlighting the importance of appropriate consultation with maxillofacial radiologists. Notochordal remnants may present as nonexpansile intraosseous low-density areas. The challenge in distinguishing these lesions radiographically with chordomas warrants follow-up to confirm a diagnosis. An empty sella is a noteworthy finding because of its potential for endocrine and neuro-ophthalmological disorders despite an asymptomatic presentation.

Cone-beam computed tomography (CBCT) is increasingly used by orthodontists and other dental practitioners. It provides volumetric information that is otherwise unavailable in standard radiographs. This aids in making accurate orthodontic diagnoses in 3 planes of space and provides localization of vital structures during other dental and surgical procedures. However, CBCT scans typically cover a field of view larger than the practitioner's area of expertise. This leads to the possibility of overlooking incidental findings outside these regions of interest, even though the practitioner is responsible for evaluating the entire volume for pathology. Such findings may be significant and warrant further investigation. The literature has reported that about 25% of CBCT images taken for orthodontics and other dental purposes show incidental findings. Another study reports 701 “reportable” findings in 381 CBCT scans.

In medical radiology, the most common reason for malpractice litigation is missed lesions. Coupled with the frequency of incidental findings on CBCT volumes, this becomes an important consideration for the clinician. A study evaluating the efficacy of identification of maxillofacial lesions by orthodontists and orthodontic residents concluded with the recommendation that clinicians should involve a radiologist in the interpretation of CBCT volumes. It reported that training by an oral and maxillofacial radiologist significantly increased the clinicians' detection rate of lesions, but even still, the 43% total of missed lesion errors is at odds with general radiology rates ranging from 4% to 13.5%.

The incidental findings may be skeletal or soft tissue, even though soft tissues are not ideally visualized because of insufficient contrast resolution. An in-depth knowledge of head and neck anatomy, as well as an awareness of the incidence of pathologic findings and false-positive findings in CBCT studies, is essential for clinicians using this technology.

This report of 2 patients demonstrates examples of abnormalities in the skull base. Patient 1 was an orthodontic patient who was tentatively diagnosed with a benign notochordal cell tumor (also called a notochordal remnant) in the clivus. Patient 2 was an implant patient who exhibited a partially empty and enlarged sella turcica.

The patient, a 13-year-old girl, came to the orthodontist for evaluation. Her medical history was unremarkable. Her CBCT scan was referred to the Department of Oral and Maxillofacial Radiology at the University of Florida to overread for pathology and to rule out any need for medical or dental referral. A low-attenuation area in the clivus was noted. It was not possible to rule out an artifact from a lytic lesion. A follow-up CBCT image was ordered, and the possibility of an artifact was subsequently ruled out, since the low-attenuation area persisted ( Fig 1 ). A magnetic resonance imaging (MRI) examination and physician referral were advised. The MRIs showed an enhancing lesion in the body of the clivus ( Fig 2 ). The appearance suggested a notochordal remnant. Because of a potential similar presentation with a chordoma, a follow-up MRI in 6 months was advised to watch for any increase in size. 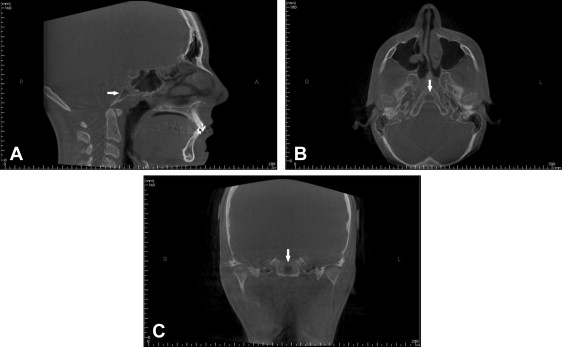 Patient 1: CBCT images of A, axial; B, sagittal; and C, coronal views showing low-attenuation area in the center of the clivus ( arrows ). A 71-year-old woman came for implant evaluation. Her medical history was unremarkable. A preoperative CBCT was obtained and referred to the Department of Oral and Maxillofacial Radiology at the University of Florida for evaluation. The CBCT images showed enlargement of sella turcica with possible disruption of the posterior wall ( Fig 3 ). The MRI evaluation was advised to rule out a space-occupying lesion. The MRIs showed an enlarged sella turcica measuring 13 mm in its anteroposterior diameter. Sella was partially empty, with pituitary tissue flattened along the floor. No pituitary mass was seen. Patient 2: CBCT images showing: A, axial; B, sagittal; and C, coronal views of the enlarged sella turcica with possible disruption of the posterior wall ( arrows ).

Two types of empty sella should be distinguished: primary empty sella (PES) and secondary empty sella. Secondary empty sella results from a previously expansile pituitary adenoma that reduces in size after surgical, radiation, or pharmacologic treatment, or by spontaneous regression. It may also result from postpartum pituitary necrosis (Sheehan's syndrome) or lymphocytic hypophysitis. On the other hand, PES is unrelated to any known previous pathologic process in the pituitary gland. Although PES may be a radiographic finding in asymptomatic patients, it is also observed in some pituitary scans that were ordered because of various symptoms and conditions such as headache, endocrine disorders, neurologic symptoms, and visual disturbances, among others. Other concurrent findings in patients with PES include hypertension, obesity, and hypopituitarism. Because of the heterogeneity of the pathogenesis of PES, patients with symptomatic PES should undergo endocrine and neuro-ophthalmologic evaluations.

Comprehensive treatment approach for bilateral cleft lip and palate in an adult with premaxillary osteotomy, tooth autotransplantation, and 2-jaw surgery