Reconstruction of the tongue can be achieved by means of various local, regional, and microvascular free flaps. Local flaps commonly used for tongue reconstruction include the nasolabial flap, submental flap, infrahyoid flap, and pedicled facial artery musculomucosal (FAMM) flap. The purpose of this article is to propose a technical modification to the FAMM flap for the reconstruction of small to medium-sized tongue defects post tumour excision: islanding the flap and tunnelling it from the lingual aspect of the mandible in a single-stage procedure. Islanding of the FAMM flap was found to be an extremely useful modification, giving excellent range of movement for the flap and eliminating the need for revision in a second stage procedure.

The reconstruction of a mobile vital organ like the tongue is always a challenge. Over the years many techniques have been advocated for this purpose, from primary closure to local, regional, and free flaps. Replacing an adequate amount and ensuring pliability of the tissues used to reconstruct the tongue matters to the overall success.

Local flaps, such as the facial artery musculomucosal (FAMM) flap, which was first described by Pribaz et al. in 1992, have been used for the reconstruction of various subsites of the oral cavity. Reconstruction with the FAMM flap has traditionally been described as a two-stage procedure. A technical modification to this flap by islanding it on the facial vessels and tunnelling it on the lingual side of the mandible for the reconstruction of lateral tongue defects is presented herein. Advantages of this technique are that flap harvest is easy, the flap is an excellent colour match, it can be done in a single-stage procedure, it allows the normal range of tongue movements, there is minimal donor site morbidity, and good mouth opening is achieved.

Anatomy of the FAMM flap

Anatomically, the buccal mucosa consists of mucosa, buccinator muscle, and subcutaneous tissue, which bears the facial artery and facial vein and laterally the outer skin. The buccinator muscle is ‘c’-shaped and arises from the upper alveolus and lower alveolus; it merges with the fibres of the orbicularis oris muscle anteriorly and the pterygomandibular raphe posteriorly. The facial artery branch of the external carotid artery enters the face at the antero-inferior end of the masseter muscle and has a tortuous course. Along its course it gives off the superior labial artery, inferior labial artery, and small branches to the buccinator muscle, and eventually terminates at the medial commissure of the eye, anastomosing with the terminal branches of the ophthalmic artery. The facial vein has a relatively straighter course, lying anterior to the facial artery and eventually terminating at the internal jugular vein.

Informed consent was obtained from the patient preoperatively. A per oral excision of the tumour (squamous cell carcinoma) on the left lateral border of the tongue was done with adequate margins and the size of the defect was noted. A selective neck dissection (level I–IV) was accomplished through a single horizontal neck crease incision. The adjacent healthy buccal mucosa with no clinical/radiological evidence of abnormality was selected and a flap outlined. The 5 × 3-cm flap was marked, preserving the opening of the parotid duct superiorly. The mucosal incision was deepened through the buccinator muscle. Careful dissection was continued, leading to the location of the facial vessels. Once identified, the facial artery and vein were ligated above the superior margin of the flap. Care was taken to prevent any button hole in the lateral skin flap. Posteriorly, as the buccinator was separated at the masseter interface, the buccal fat pad was noted. Inferiorly, the flap was separated from the lower lateral aspect of the alveolar margins of the teeth. The facial vessels and marginal mandibular nerve were identified at the lower border of the mandible and preserved. Through intraoral dissection along the facial pedicle, the intraoral flap part was connected to the extraoral part. The mobilized flap was then taken below the marginal mandibular nerve completely pedicled on the facial vessels, as shown in Fig. 1 . The flap was tunnelled lingually to reconstruct the lateral tongue defect, as shown in Fig. 2 . The buccal mucosa defect was covered with the harvested buccal fat pad, as shown in Fig. 3 . The final flap inset is shown in Fig. 4 . Excellent oral care was maintained postoperatively, and mouth opening exercises were started on day 7 postoperative. The postoperative phase was uneventful. Nasogastric tube feeding was continued for 10 days postoperatively to allow the buccal fat to heal. The FAMM flap islanded on the facial vessels delivered below the marginal mandibular nerve. 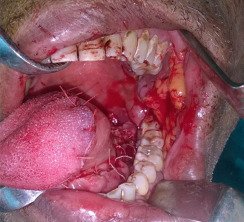 The buccal mucosa covered with a buccal fat pad. The reconstruction of a mobile musculomucosal organ like the tongue remains a challenge. Tissues chosen to replace the tongue should match in colour and pliability, and should have a predictable vasculature, be easy to harvest, and result in minimal donor site morbidity. The FAMM flap was first proposed for use in oral cavity reconstruction by Pribaz et al. in 1992. This axial flap is composed of mucosa and submucosa from the intraoral cheek, part of the buccinator muscle, and the deepest part of the labial orbicularis muscle, including the facial artery. The flap can be designed either with a superior pedicle with retrograde flow or with an inferior pedicle with anterograde flow, depending on the area to be reconstructed. Inclusion of the facial vein is not essential, due to the presence of the submucosal venous plexus located in the submucosa. However the facial vein was included in the technique presented herein.

Ayad and Xie performed a systemic review of FAMM flaps used in various series and concluded that the majority were inferior pedicle flaps (65%), as was used in the case described here. They also found that this flap was used most often for reconstruction in the oral cavity and oropharynx. Use of the FAMM flap has also been described for the reconstruction of radio necrotic ulcers of the jaw bones and for soft palate reconstruction in the case of oro-antral fistula. Duranceau and Ayad proposed a pedicled FAMM flap over the alveolus for the reconstruction of defects of the oral cavity. In contrast, the whole pedicle and flap were taken lingually in the present case, which eliminated the need for any dental extraction.

Another commonly used local flap for tongue reconstruction – the nasolabial flap – is associated with facial scarring and requires the flap base to be divided in a second stage procedure. The submental flap is contraindicated in the case of positive neck nodes. The FAMM flap may not be an option for patients with oral submucous fibrosis or a dysplastic buccal mucosa.

The islanded FAMM flap could serve as an excellent local flap for the reconstruction of small to medium-sized tongue defects, as it can be used in a single-stage procedure, provides an excellent colour match, has a very predictable vasculature, is easy to master, results in minimal donor site morbidity, provides an instant mucosal surface on the tongue, is economically feasible, and is less technique-sensitive when compared to microvascular free flap reconstruction.