Class III malocclusion is considered one of the most complex conditions in terms of diagnosis and treatment planning, and an increasing demand for surgical correction has been observed in recent years. Treatment should include the following goals: function, aesthetics, long-term stability, and the selection of the procedure with the lowest complication rate. The anatomical feasibility should also be considered.

The level of patient satisfaction is an important factor that has a significant impact on oral health-related quality of life. The facial profile comprises five main prominences: the forehead, nose, lips, chin, and the submental–cervical region. Additionally, lip thickness, lip tonicity, initial incisor inclination, and lip height affect the resulting soft tissue changes and consequently the aesthetic outcome. The final aesthetic outcome, however, is determined by the procedure performed, individual soft tissue adaptation, and achievable possible tendency. The lip and the chin are the two regions influenced by mandibular setback and maxillary advancement.

Historically, Class III malocclusions were treated by isolated mandibular setback; however, bimaxillary procedures have become increasingly frequent. One important reason for the increase in bimaxillary procedures is the achievement of stable long-term results. However, one-jaw surgery is often sufficient to correct most of the dentofacial deformity, and two-jaw surgery can increase the risk of complications. The selection of which jaw to operate on is generally based on the position of the maxilla and the mandible. Mandibular setback is generally the procedure of choice if the mandible is positioned anteriorly with the maxilla in the normal position.

The study was performed in accordance with the Declaration of Helsinki statement for medical research involving human subjects. The study protocol was reviewed and approved by the Ethics Committee of RWTH Aachen University prior to study commencement. As the patients in this study remained anonymous, the consent process was not compulsory.

A retrospective cohort study was conducted based on the clinic medical records. The patients ( n = 34) underwent combined orthodontic and orthognathic surgery and were assigned to either the mandibular setback group ( n = 17) or the maxillary advancement group ( n = 17) according to the surgical procedure performed. Although different orthodontists performed the orthodontic treatment, one surgeon performed all of the mandibular setback procedures and another performed all of the maxillary advancement procedures. The examiner in this study was blinded to the surgeon names. The study inclusion criteria were as follows: (1) non-syndromic patient with a class III dentofacial deformity and a preoperative sella–nasion–A-point angle (SNA) of 80–84° and Wits value of <0 (the Wits value is the distance between AO (perpendicular from A-point to occlusal plane) and BO (perpendicular from B-point to occlusal plane)) ; (2) the patient had completed skeletal growth; (3) the surgical treatment performed was either mandibular setback or maxillary advancement; (4) the patient had not undergone previous surgery involving the middle or lower face.

A lateral cephalogram was taken at the beginning of orthodontic treatment (T1) and at least 6–10 months postoperatively (T2), after the postoperative swelling had subsided. Patients were asked to have their teeth in occlusion and their lips in an unstrained and relaxed position to avoid muscular compensation. The changes in outcome (pre- and postoperative) were compared by means of continuous outcome distances and angles (sagittal, vertical), cervical length (Gn′–H: the distance between the soft tissue gnathion (Gn′) point and the neck point (H)), nose position, and dental, upper lip, and lower lip changes ( Fig. 1 ). To assess the differences between the two groups – mandibular setback vs. maxillary advancement – the analysis of covariance (ANCOVA) models were adjusted to the data of the 14 outcome parameters separately ( Table 1 ). Specifically, cervical length served as a dependent variable; age, sex, and treatment, as well as the (two-way) interaction between age and treatment and the (two-way) interaction between sex and treatment served as independent variables (fixed-effects). Normal errors were assumed and the validity was checked by residual and influence diagnostics. Similar models were used for the other outcome variables.

Using a backward selection process, the model was first reduced by removing the non-important interaction terms ( P > 0.05) and was then continued in the same way with the main effectors of sex and age. Of primary interest was the effect on the main effect treatment group in the ANCOVA models. The type 1 error rate for the multiple testing of the 14 outcome variable endpoints was controlled using Hochberg's multiple testing procedure. The results of the adjusted effects of the different treatments (adjusted for age and sex and the interaction term) on the respective outcome variables are given in Table 2 , along with the 95% confidence intervals for the mean difference, the P -values, and the (adjusted) Hochberg significance levels. The overall significance level was set to 5%. All computations were performed using SAS version 9.4 (TS1M1) (SAS Institute, Cary, NC, USA) in Windows X64 7 Pro (Microsoft, Redmond, WA, USA).

There was a significant difference between the maxillary advancement and mandibular setback groups with regard to sex ( P = 0.003).

The change in upper lip thickness in the mandibular setback group was not significantly different to that in the maxillary advancement group when using the Hochberg significance level ( P = 0.029).

The distance between the lower lip and the aesthetic line in the mandibular setback group was not significantly different to that in the maxillary advancement group ( P = 0.549).

The postoperative change in the soft tissue facial angle in the maxillary advancement group (mean −0.88°, SD 2.61) was similar to that in the mandibular setback group ( P = 0.128).

The postoperative facial contour angle did not differ significantly between the groups using the Hochberg significance level ( P = 0.205).

The postoperative change in the upper incisor inclination in the mandibular setback group (mean 1.9°, SD 7.1) was similar to that in the maxillary advancement group (SD 8.2) ( P = 0.549).

The nasolabial angle increased after mandibular setback (SD 7.53) and decreased after maxillary advancement (SD 6.5), but the difference between the groups was not significant ( P = 0.772).

The postoperative change in gonion angle of the mandibular setback group (SD 3.6) was similar to that in the maxillary advancement group ( P = 0.800).

The purpose of this study was to compare the aesthetic outcomes of maxillary advancement with those of mandibular setback in patients with a class III dentofacial deformity but with the maxilla in the normal position (SNA of 80–84°). This should help in selecting the appropriate jaw if one-jaw surgery is planned, or in choosing the appropriate amount of movement for each jaw if two-jaw surgery is considered. Photographs of a patient who underwent maxillary advancement: (a) pre-treatment, (b) post-treatment. 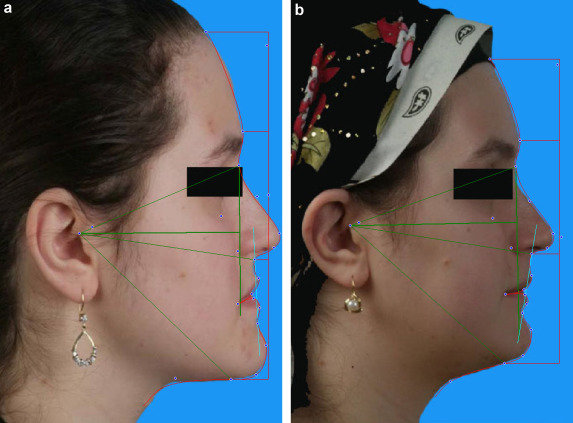 Photographs of a patient who underwent mandibular setback: (a) pre-treatment, (b) post-treatment.

A consciousness and perception of the attractiveness of different facial parameters may be useful in compiling the optimal treatment option. Generally, the amount of sagittal discrepancy and the position of the mandible and the maxilla vis-à-vis the skull base are decisive factors for selecting the surgical procedure. If there is a small discrepancy, one-jaw surgery will generally be sufficient to correct the deformity; in such cases, two-jaw surgery will inevitably increase the risk of complications without additional benefits. Many studies have shown that mandibular setback has a negative impact on function and can lead to a negative aesthetic outcome in the submental region. In addition, maxillary advancement increases the width of airways and improves the aesthetics of the nasolabial and submental regions. The vertical change was similar in the two groups ( Table 2 ). A minimal vertical change following maxillary advancement caused a forward movement of the mandible and increased the cervical length positively, as also reported by Proffit et al.

As recommended in a previous study, surgeons performing this operation should limit the amount of mandibular setback to less than 5 mm and correct the remaining distance by advancing the maxilla, irrespective of the SNA or SNB. This has a positive aesthetic impact on the submental region, improves the functional outcome, and shows stable, long-term results, as reported in other studies. Some authors have also reported that isolated mandibular setback is less predictable and less stable, and others have shown that maxillary advancement is a more stable component and causes larger mandible autorotation.

The nose, facial contour angle, cervical length, and facial angle are the main components of facial aesthetics, and should all be considered when planning and predicting the outcome of orthognathic surgery. Vasudavan et al. showed that the Le Fort I advancement produces an elevation of the nasal tip, as evidenced by a reduction in nasal length and nasofrontal angle, along with an increase in the nasal tip protrusion. In the present study, it was found that advancing the maxilla had a great effect on the nose (nasolabial angle and nose prominence), the cervical length, and the upper lip, as reported previously. The distance from the upper lip to the aesthetic line – depending on the patient's sex – was significantly different after maxillary advancement when compared with mandibular setback. In female patients, maxillary advancement was performed more often than mandibular setback, whereas the opposite was the case for male patients. A possible reason for this is related to the surgeon's consideration of the double chin deformity which can result from mandibular setback. This requires further investigation.

In conclusion, maxillary advancement achieved a significantly more favourable outcome when considering the cervical length in class III patients, regardless of the maxilla position. These findings should be considered when selecting the appropriate jaw for osteotomy.

Can a surgery-first orthognathic approach reduce the total treatment time?