Under the random-effects model, the true effect size is assumed to be different across studies. These studies are not identical (as in the case of the fixed-effect model), but they have enough in common to be included in the meta-analysis and synthesize their information. For example, we are interested in identifying studies that examine the clinical effectiveness, such as bond failures of plasma vs halogen curing lights. We randomly sampled patients from different practices (also randomly selected). If plasma light is actually more effective than halogen, we expect the effect size (eg, risk ratio [RR] or odds ratio [OR]) to be similar but not identical across the practices. Because these practices can differ in their populations (ie, crowding severity, cooperation, age, and sex), implementation of interventions (ie, practitioner expertise, adhesives, and type of brackets used), outcomes (duration of follow-up), and settings (geographic area), among other reasons (known as covariates), the magnitude of the effect size is likely to vary across the studies; the effect size may be lower in practices with more expertise and older participants and vice versa. In practice, the existence of such covariates that affect the effect size is innate and leads to variations in the magnitude of the effect. The application is based on the data set we used for the fixed-effect meta-analysis ( Table I ). The results under the random-effects model are almost the same (and slightly less precise) as those under the fixed-effect model (random-effects: RR = 0.92 with 95% confidence interval [CI] = 0.70-1.21 vs fixed-effect: RR = 0.90 with 95% CI = 0.69-1.19). This trivial difference was expected because the between-study variance was found to be trivial. The results of this worked example are illustrated in Figure 2 . To simplify this example, clustering owing to multiple teeth bonded within patients was not considered during this analysis. Accounting for clustering would have increased the width of the 95% CIs, and hence the uncertainty of the estimates with no difference in the conclusions presented here.

Table I
Bond failures between plasma and halogen curing light
Note: To perform a meta-analysis for binary data, it is necessary to have the sample size per group and the number of events. For the random-effects meta-analysis on continuous data, we used the data set we applied for the fixed-effect meta-analysis ( Table II ). The results for standardized mean difference (SMD) under the random-effects model are almost the same (and less precise) as those under the fixed-effect model (random-effects: SMD = −0.14 with 95% CI = −0.47 to 0.19 vs fixed-effect: SMD = −0.13 with 95% CI = −0.33 to 0.07). This difference in the width of 95% CIs was expected because the between-study variance was found to be equal to 0.08. The results of this worked example are illustrated in Figure 3 .

Table II
Initial orthodontic alignment using Damon and conventional appliances
Note: To perform a meta-analysis for continuous data, it is necessary to have the sample size, the mean, and the SD per group.
SD , standard deviation. 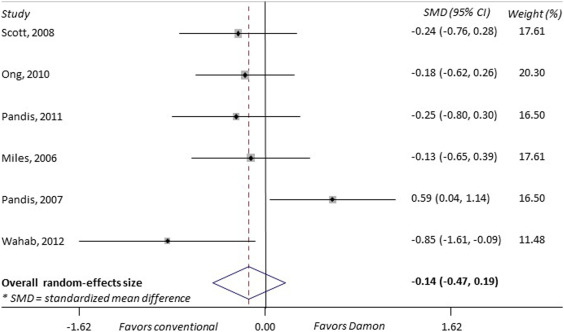 Medical malpractice or breach of contract