Although it is well known that orthognathic surgery modifies the upper airways, it is still unclear which are the determining factors to achieve adequate and predictable results in all the patients regardless of the initial malocclusion type and satisfying all the traditional orthognathic treatment objectives. This study aimed to correlate airway changes with surgical movements and other variables and the planning modalities to better understand how to control airway dimensions with treatment.

This study involved 61 patients requiring bimaxillary surgery to correct various dentoskeletal deformities without a history of obstructive sleep apnea syndrome. In all the subjects, the orthosurgical treatment was planned according to the same treatment principles and regardless of the initial airway dimension. The 3-dimensional volume and minimal axial area values generated by cone-beam computed tomography at the preoperative, 3-week, and 1-year postoperative controls were evaluated and correlated with surgical movements and other variables.

Although the planning did not consider the initial size of the airways, a significant increase was found for volume and minimal axial area in both the short term (volume, 29.0%; area, 51.2%) and long term (volume, 18.2%; area, 39.8%) with no regard to the type of malocclusion. Only 3 of the variables examined were found to significantly affect the airway: the preoperative dimensions, gender, and the extent of mandibular advancement. These 3 explanatory variables combined can predict the 1-year postoperative volume and minimal area with an accuracy of 71% and 44%, respectively.

According to this study, orthosurgical treatment can protect airways from unexpected unfavorable changes and satisfy the other treatment goals regardless of the initial malocclusion as long as the facial deformities are properly addressed for each patient. Furthermore, these results identified 3 main variables that influence postoperative airways dimensions the most. Keeping in mind that the relationship between airway dimensions and obstructive sleep apnea syndrome is not clearly explained, these considerations may prove to be a useful tool to help in preventing and managing this disease. Studies involving larger samples of patients and evaluating more variables are mandatory to better understand the correlation between airways and sleep function.

It is well established that orthognathic surgery can determine modifications in posterior airway dimensions. There have been reports beginning in the eighties that mandibular advancement surgery can effectively determine an increase in airway dimensions. , Maxillo-mandibular advancement and the counterclockwise rotation of the occlusal plane have also been used in recent years to increase upper-airway volume. The favorable outcomes associated with osteotomies carried out to modify upper-airway dimensions have progressively made this procedure the first surgical option to treat a growing disease as obstructive sleep apnea syndrome (OSAS) given its high success and cure rates.

Together with the other traditional objectives of orthognathic surgery, maintaining or increasing upper-airway dimensions continues to be one of the principal treatment aims in patients unaffected by OSAS but requiring surgery to correct occlusal problems because of dentoskeletal anomalies.

Unexpected airways decline after surgery can lead healthy patients to develop sleep symptoms as described in the literature, especially for Class III deformities.

Despite the large number of works that have been published on this subject, there are still questions linked to changes in posterior airway dimensions after orthognathic surgery. For example, only a few papers proposed models predicting airways changes in relation to surgical movements, although all of them suffered significant limitations. ,

For these reasons, surgeons tend to maximize mandibular advancement (10-12 mm) when they treat OSAS patients. There are also uncertainties regarding the factors that are most involved in upper-airway modification. In addition, preoperative criteria that could presumably contribute to optimizing functional and esthetic outcomes have still not been identified and verified. Finally, doubts have also been expressed regarding the long-term stability of the upper-airway area and volume modifications after surgery.

In light of these considerations and in the attempt to learn more about the ambiguous aspects regarding the relationship between the surgical movements performed during orthognathic surgery and upper-airway changes, this retrospective study was designed to evaluate patients affected with different types of dentoskeletal deformities but unaffected by OSAS. The study evaluated upper-airway modifications over both short and long-term periods after orthognathic surgery to assess the correlations between planning modalities with several other parameters and modifications in the airway dimensions. Until now, the baseline characteristics of the upper airways in patients without OSAS problems have not been taken into consideration during the preoperative surgical planning phase.

A retrospective study was designed to investigate posterior airway changes in patients who underwent bimaxillary surgery to correct different types of dentoskeletal deformities. A database search of the patients who had undergone orthognathic surgery between November 2017 and July 2019 at the Department of Maxillofacial Surgery of the University of Verona Medical Centre was carried out.

Patient data, including gender, age, date of surgery, dentoskeletal Class, if the maxillary surgery was segmental and the surgical movements performed were collected and recorded. Two maxillofacial surgeons performed all of the surgical procedures.

The surgical movements were planned according to FAB (Face Airways Bite) philosophy as described by Arnett. Presurgical airways did not determine the surgical movements—the face determined how and where the corrected Class I occlusion was positioned. The plan was completed in a virtual 3-dimensional environment (Virtual Nemo FAB Software, Nemo FAB 2019; Nemotec, Leganés, Madrid).

CBCT scanning was carried out with the patient placed in a standing position, with the head in a natural head position and the lips relaxed; the mandible was in a centric jaw relation, and the patient was instructed not to swallow. The scans were acquired following the protocol of Guijarro-Martínez and Swennen, as it has been hypothesized that swallowing or maintaining the head in a non-natural position can determine significant variations in airway dimensions. The scans were obtained during a single rotation of the machine; a dose of approximately 59 mSv was absorbed during each scan.

Digital imaging and communications in medicine images (DICOMs) and dedicated software were used for segmentation (Nemo FAB 2019; Nemotec). The Hounsfield unit threshold was set automatically to best match the actual airway soft tissue limits; the same Hounsfield unit value was used for all the scans of the same patient. The upper limit of the segmentation was set as a horizontal line passing through the most cranial point of the second vertebrae (axis vertex). The lower limit was set as a horizontal line passing through the most anterior and cranial point of the C4. The soft tissue surrounding the airway was used as its lateral and sagittal limits ( Fig 1 ). The process was repeated for each scan carried out at the 3-time points. The posterior airway space (PAS) and the minimal axial area (MAA) were calculated automatically on the basis of the upper-airway segmentation by the software. A database for the patients’ PAS and MAA values, age, and surgical movements was created, and all pertinent data were registered.

Airways segmentation example: A, Lateral view; B, Axial view of the MAA; C , 3-dimensional simulation of the airway in lateral view (colored) .

All the analyses were carried out using Stata (version 13; StataCorp, College Station, Tex). Power analysis was conducted from a pilot study carried out in 32 patients. Assuming a medium effect size (d = 0.4), it was concluded that a sample size of 61 subjects should be included to reach 87% power to detect volumetric changes. Normality of distribution of study variables was assessed with Jarque-Bera test: only MAA T0 appeared to follow a non-normal distribution. A Student t test for paired data test was used to verify the presence of statistically significant differences in the PAS and MAA values at the various time points (T0 − T1, T1 − T2, T0 − T2). The analysis of covariance (ANCOVA) test was used to determine which independent variable(s) (surgical movements, age, gender, type of surgery, PAS T0, MAA T0) was/were able to explain changes in the dependent variables (PAS T1, PAS T2, MAA T1, MAA T2). A stepwise multiple linear regression was then used to calculate the effect of each explanatory variable on the dependent variables. Single simple linear regressions were used to verify specific hypotheses.

The significance levels for the t test, ANCOVA, and linear regression tests were set at P = 0.05.

Sixty-one patients who had undergone orthognathic surgery between November 2017 and June 2019 at the Department of Maxillo-Facial Surgery of the University of Verona Medical Centre met the inclusion criteria. The participants’ mean age at the time of surgery was 24.2 ± 7.6 years. The female-to-male patient ratio was ∼7 to 5. All the treatments performed consisted of bimaxillary surgeries, in 39 out of 61 maxillary osteotomies consisted in three-pieces LeFort I ( Table I ).

Data analysis of the virtual surgical planning results showed a mean advancement of 5.7 mm at the maxillary incisor, 2.23 mm at the ANS, 5.08 mm at the Md1, and 10.23 mm at the POG. The mean modification in the occlusal plane was 7.5° in the counterclockwise direction ( Table II ). The mandibular incisor was moved backward in only 11 patients and the POG in 8 patients. 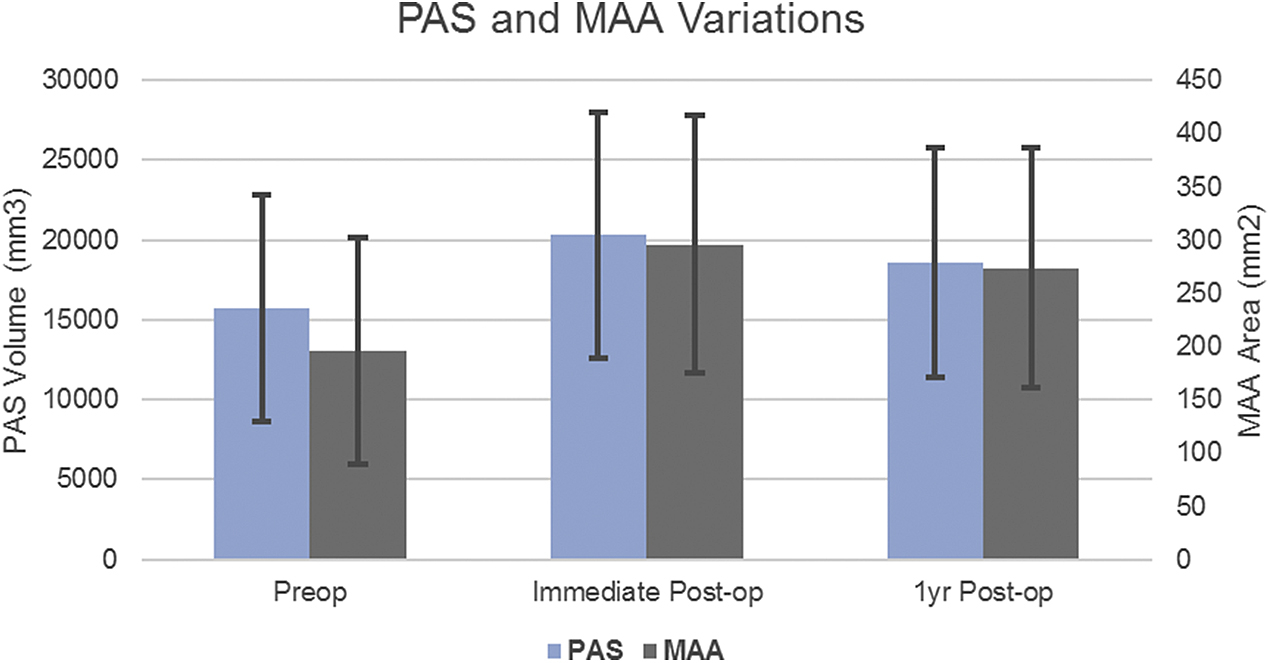 A stepwise multiple linear regression was then carried out to investigate the effect of each causal variable on the postsurgical PAS and MAA values. The results of the analyses are outlined in Table VI .

The sagittal mandibular advancement, gender, and the initial airway volume again resulted in significant results in the model, highlighting that they are the variables that most affected the postsurgical volume. The only exception was the MAA at T1, which was not significantly affected by any surgical movements.

Using a simplified model, it is possible to obtain a rapid formula to predict the long-term postsurgical MAA and PAS. This formula contains all the variables that bring significant information in explaining the final result (gender, preoperative dimensions, extent of mandibular advancement). According to our study and considering the multiplicity and simultaneity of the surgical movements and the significance of the ANCOVA test, it is impossible to establish how much a single movement has taken alone can influence the final volume/area as proposed by other authors.

The impact of fixed orthodontic appliances and clear aligners on the oral microbiome and the association with clinical parameters: A longitudinal comparative study