The purpose of this study was to retrospectively investigate the outcomes of Brånemark System Mk III TiUnite/Groovy implants placed in patients at Kobe University Hospital. Various risk factors for implant failure, including mechanical coupling, were investigated by univariate and multivariate analysis. The predictive variables investigated included age, sex, smoking habit, general health, history of radiation therapy, application of a dentomaxillary prosthesis, type of prosthesis, use of alveolar bone augmentation, site of implant insertion, mechanical coupling between implants, and the length and diameter of the implants. Of the 907 implants investigated, only 23 were unsuccessful; the overall survival rate was 96.7%. Increased age, radiation therapy, application of a removable prosthesis or dentomaxillary prosthesis, lack of mechanical coupling between implants, and shorter implants (≤8.5 mm) were significant risk factors for implant failure according to univariate analysis ( P < 0.05). Multivariate analysis identified a significant association ( P < 0.05) between dental implant failure and a lack of mechanical coupling between implants (odds ratio 6.88) and shorter implants (≤8.5 mm) (odds ratio 3.43). The findings of this study demonstrated multivariate relationships between various risk factors and dental implant failure.

Dental implants are frequently used to support prosthetic reconstructions of an incomplete dentition, and the survival rate for dental implants is high. Dental implants have some advantages over conventional prosthetic treatment, because they protect the structure of the remaining teeth and reduce the probability that dentures will be required in the future.

Dental implant failure is characterized by mobility of the implant, continuing radiolucency around the implant, peri-implantitis with suppuration, or subjective complaints from the patient. Investigators have described several risk factors affecting implant survival rates, including the location of insertion (incisor or molar region, and maxillary or mandibular bone), the length, diameter, and design of the implant, the use of augmentation procedures, and patient-related risk factors such as age, smoking, history of periodontal disease, diabetes mellitus, and osteoporosis. However, the relationships between some risk factors and dental implant failure remain controversial. Few studies to date have evaluated the relationship between the mechanical coupling of the prosthesis and implant failure.

Brånemark System Mk III TiUnite/Groovy implants (Nobel Biocare, Gothenburg, Sweden) have been commercially available in Japan since December 2000. These implants have been used at Kobe University Hospital since July 2003. In this study, the outcomes of Brånemark System Mk III TiUnite/Groovy implants placed in patients at this hospital were investigated retrospectively, and the relationships between various risk factors, including mechanical coupling, and dental implant failure were examined.

A total of 907 Brånemark System Mk III TiUnite/Groovy implants were placed in 115 male patients and 127 female patients by dentists of the Department of Oral and Maxillofacial Surgery, Kobe University Graduate School of Medicine, between July 2003 and December 2013. These implants were investigated in this study.

The mean age of the patients was 52.1 ± 15.6 years (range 16–90 years). Before surgery, each patient was informed about possible complications, including potential risks during the procedure, and each patient provided full informed consent. The implantation was performed as a two-stage surgical procedure.

The most common age group of the patient sample was 50–59 years ( Fig. 1 ); 326 implants (35.9%) were inserted in this age group. Forty patients had completely edentulous jaws (19 maxillae and 21 mandibles) and 202 had partially edentulous jaws (104 maxillae and 98 mandibles). The mean follow-up time for the implants that survived was 71.3 months (range 12–137 months). Patients who did not attend an examination for any reason during the first 12 months of follow-up were excluded. 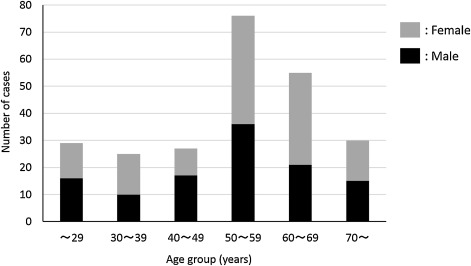 In this study, implant success was defined according to Buser et al., using the following criteria: (1) absence of persistent subjective complaints such as pain, foreign body sensation, and/or dysesthesia; (2) absence of peri-implant infection with suppuration or mobility; and (3) absence of a continuous radiolucency around the implant. In the case that an implant was associated with a history of acute infection with suppuration and progressive bone loss, this was classified as implant survival and not as implant success.

The alveolar bone at the sites of implant insertion was evaluated by panoramic radiography and computed tomography (CT). The medical CT images were taken using an Aquilion 64 scanner (Toshiba Medical Systems, Tokyo, Japan). The axial plane was set parallel to the occlusal plane, and continuous 0.625-mm slices were taken. Coronal and sagittal images were reconstructed from the raw data.

The predictive variables investigated were patient age (≥60 or <60 years old), sex, smoking habit, general health (history of steroid treatment, diabetes mellitus, osteoporosis), history of radiation therapy, application of a dentomaxillary prosthesis, type of prosthesis (fixed/removable), use of alveolar bone augmentation, the site of implant insertion (anterior/posterior), mechanical coupling between implants, the type of edentulism (complete or partial), and the length (≤8.5 or ≥10 mm) and diameter (≤3.3 or ≥3.75 mm) of the implants. All factors are listed in Table 1 . The end point was defined as the failure of an implant, loss to follow-up, or September 2015.

Table 1
Patient and implant characteristics, and relationships between the incidence of implant failure and potential risk factors.

The data collection and statistical analyses were performed using SPSS version 15 software (SPSS Inc., Chicago, IL, USA). The association of each variable with the failure of implants was tested by non-parametric Mann–Whitney U -test for ordinal variables and Fisher's exact test or the χ 2 test for categorical variables. A value of P < 0.05 was considered statistically significant.

The cumulative implant survival rate was calculated using the Kaplan–Meier product-limit method. The level of significance among the curves was determined using the log-rank test. A value of P < 0.05 was considered statistically significant.

All of the variables associated with implant failure were introduced into a multiple logistic regression model. Forward stepwise algorithms were used, with the rejection of those variables that did not fit the model significantly. Factors found not to be indicated as significant in the univariate analysis were excluded from this model. The multivariate odds ratio (OR) and 95% confidence interval (CI) were also calculated for the significant factors. A value of P < 0.05 was considered statistically significant. The discriminant hit ratio (98.5%) was considered to be excellent in this study. Applying the logistic regression model with forward stepwise algorithms, it was found that a lack of mechanical coupling between implants (OR 6.88) and shorter implants (≤8.5 mm) (OR 3.43) were significant variables ( Table 3 ).

There were only 23 implant failures among the 907 implants, and the 10-year overall survival rate was 96.7% in this study ( Fig. 4 ). The 10-year overall success rate was 92.0%. Details of the implant failure cases are presented in Table 4 . In the failed cases, the demographic risk factors identified were smoking, radiation therapy, diabetes mellitus, and steroid treatment. Five of the 23 failed implants failed before loading, and 18 implants failed after loading. The median duration to implant failure was 8 months, with a range of 1–94 months. Two implants in the mandible that failed before loading seemed to be affected by heat-induced bone tissue injury (HBTI). Three implants that failed before loading in the maxilla seemed to be affected by poor primary stability. Three implants were surgically removed because of the treatment of a recurrent tumour. Five out of six failed implants (83.3%) associated with a dentomaxillary prosthesis seemed to be affected by premature loading or overloading. Overall survival rate for mechanical coupling between implants and for separate prostheses. In this study, the outcome of Brånemark System Mk III TiUnite/Groovy implants placed in patients at Kobe University Hospital was investigated retrospectively, as well as the risk factors associated with dental implant failure. The survival rates of various implants have increased in recent years, with reported rates of 83–97%. The surface of the Brånemark implant system has changed from a machined surface to the TiUnite surface. This surface is characterized by many open pores in the low micrometre range, which are thought to improve the bone-to-titanium surface contact. The survival rate of TiUnite surface implants has been shown to be higher than that of Brånemark implants with machined surfaces (98.6% vs. 92.1%). The 10-year overall survival rate of Brånemark System Mk III TiUnite/Groovy implants in this study (96.7%) compares favourably with previous reports. In this study, there were 11 (47.8%) cases of early implant failure and 12 (52.2%) cases of late implant failure. This is consistent with some previous studies that also found late implant failure to be more common than early failure. Several studies have indicated that overloading and peri-implantitis are major causes of implant failure. These were also found to be major causes of late implant failure in the present study (10 cases, 83.3% ).

It has been demonstrated in some studies that early or immediate loading can be applied to implants successfully. However, early loading or immediate loading may theoretically lead to failure of osseointegration. At Kobe University Hospital, a two-stage protocol with late loading is performed. However, in some cases involving dentomaxillary prostheses, early loading is done to recover articulation and swallowing function early. In these cases, the initial healing for osseointegration might be disturbed by excessive loading of the implant via the dentomaxillary denture. Therefore, it is recommended that undesirable loading be minimized when an early loading protocol is used during the initial healing period, as also mentioned previously by Han et al.

In this study, removable dentures and dentomaxillary prostheses were risk factors for implant failure according to the univariate analysis. However, they were not significant risk factors according to the multivariate analysis. Bryant also suggested that implant survival and success might not be affected by established types of implant prostheses.

Few studies to date have evaluated the relationship between mechanical coupling of the prosthesis and implant failure. Naert et al. investigated the efficacy of splinted implants versus unsplinted implants in overdenture therapy in completely edentulous patients and demonstrated that factors such as attachment level and marginal bone level were not significantly different among the groups. They suggested that both splinted implants and unsplinted implants were reliable treatment methods. However, they investigated a limited number of cases (36 completely edentulous patients). In the present study, a lack of mechanical coupling between implants (OR 6.88) was associated with a higher risk of implant failure, as indicated by multivariate analysis. However, a separate prosthesis of a single implant may not increase the risk, because there is no implant failure of an intermediate single missing tooth.

Some reports have demonstrated higher failure rates with shorter implants. Misch et al. observed a low success rate (85.3%) for implants less than 10 mm in length. Olate et al. concluded that there was a significant relationship between early implant failure and a short length implant (6–9 mm). However, another study demonstrated that short implants could be reliable and have a success rate similar to longer implants. In this study, shorter implants (≤8.5 mm) were associated with a higher risk of implant failure, as indicated by multivariate analysis (OR 3.43). Sun et al. suggested that it is important to consider the conditions under which short implants are placed. They speculated that most short implants are placed in the posterior maxilla, where the bone quality is poor. In this study, seven of the total eight short implants that failed (87.5%) were placed in the maxilla, and in the case of the one implant failure in the mandible, the patient had received radiation therapy. Thus, it is possible that implant failures are affected more by bone quality than by the length of the implant, and we should first consider the quality of the bone, as suggested by Sun et al. These inconsistent findings should be studied further.

In conclusion, multivariate relationships between various risk factors and dental implant failure were successfully demonstrated. In particular, it was found that a lack of mechanical coupling between implants (OR 6.88) and shorter implants (≤8.5 mm) (OR 3.43) showed a significant association with dental implant failure, as indicated by multivariate analysis. It is believed that these findings will contribute to the successful treatment of patients with dental implants by dentists and oral surgeons.

This study was approved by the Institutional Review Board of Kobe University Graduate School of Medicine (February 9, 2016). The relevant judgement reference number is No. 1875.