The sample consisted of 25 patients with transverse maxillary discrepancy treated with a maxillary skeletal expander, a type of MARPE appliance. Cone-beam computed tomography scans were taken before and after maxillary expansion; the interval was 6.0 ± 4.3 months. The sample was divided into GR and NG groups using cervical vertebral and midpalatal suture maturation. Linear and angular 3-dimensional dentoskeletal changes were assessed after cranial base superimposition. Groups were compared with independent-samples t test ( P <0.05).

Both groups displayed marked transverse changes with a similar ratio of skeletal to dental transverse changes and parallel sutural opening from the posterior nasal spine–anterior nasal spine; a similar amount of expansion occurred in the anterior and the posterior regions of the maxilla. The maxilla expanded skeletally without rotational displacements in both groups. The small downward-forward displacements were similar in both groups, except that the GR group had a significantly greater vertical displacement of the canines (GR, 1.7 ±1.0 mm; NG, 0.6 ± 0.8 mm; P = 0.02) and anterior nasal spine (GR, 1.1 ± 0.6 mm; NG, 0.5 ± 0.5 mm; P = 0.004).

Treatment of patients with MARPE appliance is effective in GR and NG patients. Although greater skeletal and dental changes were observed in GR patients, a similar ratio of skeletal to dental transverse changes was observed in both groups.

The use of palatal expanders to achieve maxillary expansion in patients with a transverse discrepancy has been described for over one and a half centuries. Angell was the first to develop and use a palatal expander to achieve maxillary expansion in 1860. In 1961, Haas introduced his version of the palatal expander, which involved an acrylic coverage of the palate. Despite Haas and Hyrax expanders not changing in design during the last 50 years, the recent addition of miniscrews to the Hyrax expander has allowed clinicians to explore a new realm of possibilities for correction of transverse maxillary discrepancies.

Traditionally, maxillary expanders were ideal for patients who were prepubertal and had a transpalatal width less than 33-35 mm, which is the average width for patients with mixed dentition as described by Spillane et al. As patients begin their pubertal growth spurt and transition into early adulthood, the 2 palatal shelves begin to fuse. The fusion of the palatal sutures challenges clinicians treating patients who already have gone through their pubertal growth spurt and yet have a transverse maxillary discrepancy. As these patients mature, the palatal shelves become more interdigitated, resulting in greater dentoalveolar expansion and less skeletal expansion when treated with a traditional expander. , Another factor that should be considered when treating these patients is the resistance of circummaxillary sutures such as zygomaxillary buttress and sphenoidal sutures, which can hinder palatal expansion. ,

An alternative treatment modality for postpubertal patients with a transverse discrepancy that cannot be corrected by orthodontic tooth movement is surgically assisted rapid palatal expansion. Although the success rate for the surgical correction of the transverse discrepancy is high, it is associated with the risks normally encountered with any surgical procedure.

Studies have shown that the expansion achieved with microimplant assisted palatal expander is similar to that of traditional expanders, such as Hyrax, , Haas, and quad-helix appliances, with about 40% of expansion being skeletal, 20% alveolar, and 40% dental tipping. , In theory, when a microimplant assisted rapid palatal expansion (MARPE) is activated, the forces of the expander are transmitted through the miniscrews to the palate, resulting in more skeletal expansion and less dental expansion, a finding that suggests better long-term stability. Moreover, MARPE appliances are a clinically acceptable nonsurgical treatment option to correct mild-to-moderate transverse discrepancies for skeletally mature patients.

For this study, an important distinction must be made. MARPE is an umbrella term for any appliance that uses miniscrews to help achieve orthopedic expansion. The maxillary skeletal expander (MSE) is a hybrid appliance with bone and tooth anchorage. In contrast, bone-anchored expanders with absolute bone anchorage do not use any dental anchorage but rely solely on miniscrews to achieve orthopedic expansion. With this distinction in mind, this study aimed to determine if MSE can achieve maxillary skeletal expansion in growing (GR) and nongrowing (NG) patients. The significance of this study is that it compares maxillary and dental 3-dimensional (3D) displacements relative to the cranial base in GR and NG patients, using a well-defined 3D analysis.

This study was a secondary data analysis of deidentified cone-beam computed tomography scans (CBCT) of patients with posterior unilateral or bilateral crossbites who underwent treatment with MSE. The study was approved (ID no. HUM 00146140) through the University of Michigan Institutional Review Board process. The sample consisted of CBCT scans taken between 2015 and 2018 and was collected from clinical database archives at the University of West Virginia.

Inclusion criteria for the study included the following: (1) patients with transverse skeletal maxillary discrepancy treated with the MSE appliance. Transverse discrepancy was determined using the maxillomandibular differential index (>16.4 mm in GR patients and >19.6 mm in the NG patients) ; (2) no previous orthodontic treatment; (3) no history of syndrome, trauma, or oral/craniofacial surgery; (4) no congenital facial anomaly or dysmorphism; (5) preexpansion and postexpansion CBCT scans, with the field of view including the cranial base; and (6) adequate scan quality, without movement artifacts.

The final sample consisted of CBCT scans from 25 subjects (12 females and 13 males) who met the inclusion criteria. The skeletal maturation of each subject was assessed using the cervical vertebra maturation (CVM) and midpalatal suture maturation (MSM) methods. The CVM stage was determined by 2 independent observers (J.A.M and L.F), using lateral cephalograms generated from CBCT images. The MSM stage was assessed by 2 independent observers (L.H.S.C and F.A), using standardized multiplanar views of the CBCT scans. Based on these classifications, the study sample was divided into 2 groups: 11 GR (CVM 1-4 and MSM B-C) and 14 NG (CVM 5-6 and MSM D-E) subjects ( Fig 1 ). The MSE used in this study consists of a central expansion jackscrew with 4 attached arms soldered to orthodontic bands placed on maxillary first molars ( Fig 2 ). The addition of 4 sheaths welded to the body of the central expansion jack screw allowed for the placement of the miniscrews in the roof of the mouth. The miniscrews were 1.8 mm in diameter and varied from 8 to 12 mm in length, depending on what was required to achieve bicortical engagement. The palatal miniscrews were placed symmetrically and parallel to the midpalatal suture (MPS). They were also positioned posteriorly without extending into the palatine processes; maintaining bony anchorage in the hard palate maximizes orthopedic forces to the pterygoid plates. The jackscrew was placed as close as possible to soft tissues, without impinging on them, to avoid entrapment of food particles.

Activation protocol for all subjects began 2 weeks after the placement of the miniscrews. The rate of activation was standardized according to the subjects’ chronological age, as shown in Table I . Patients were taught how to turn the jackscrew to activate the expansion. Furthermore, they were shown how to maintain proper oral hygiene. Patients were seen at regular orthodontic appointment intervals, in which the number of turns was recorded, and the patient could be monitored for any adverse events. The expansion was concluded when the lingual cusp of the maxillary molar contacted the tip of the mandibular molar buccal cusp. If the expansion occurred asymmetrically, it was stopped according to the side that expanded more.

The CBCT scans originally were obtained for clinical purposes with a scanning protocol that involved 17 × 23 cm extended field of view, with 0.3-0.4 mm voxel size. The scans were taken before treatment (T1) and after the maxillary expander (T2) removal. The generated digital imaging and communications in medicine files were converted to Guys Imaging Processing Laboratory files used in the open-source software ITK-SNAP. All image analysis steps were performed by 1 examiner (C.M), and each step was performed on all subjects before moving to the next step.

Images that did not have a voxel size of 0.3 mm were resampled to 0.3 mm isotropic voxel size for proceeding segmentation of anatomic structures of interest (CMF Registration, 3D Slicer Software ). Subsequently, 3D image analysis was performed through the following steps:

Model-to-model distance and shape population viewer, color maps were generated to visualize the changes from T1 to T2 ( Fig 6 ). Semitransparent overlays of T1 and T2 show skeletal changes in a GR patient from pretreatment (T1; shown in white ) to posttreatment (T2; shown in red ), the maxilla expanded skeletally without rotational displacements.

Sample size calculation estimated that a minimum of 11 patients in each group was needed on the basis of a power of 0.86, an alpha of 0.05, a mean difference of 1.0 ± 1.0 mm for lateral displacement of the nasal cavity (NC, defined in Table II ).

To measure the study error, the same operator (C.M) performed all measurements on 20% of the sample after a 30-day interval. The intraclass correlation coefficient was used to assess intraobserver repeatability. Chi-square tests assessed differences in gender distribution between GR and NG groups. Differences in skeletal and dental measurements also were tested between the 2 groups, at baseline and after expansion, using an independent-samples t test.

The sample comprised 11 GR and 14 NG patients. The mean age at T1 for the GR and NG sample was 11.9 ± 3.1 years and 19.9 ± 4.8 years, respectively. The mode CVM was 3 for the GR group and 5 for the NG group. Only 2 patients in the NG group were classified as stage E of MPS closure, whereas 12 patients were classified as stage D. The study error and the intraclass correlation coefficient are presented in Table IV . The male and female distribution and maxillary baseline measurements were similar in both groups ( Table V ).

Table VI shows the mean, standard deviation, and significance of all tested variables between the GR and the NG groups. No significant differences were found between the male and female subjects.

Figures 7 and 8 illustrate the treatment changes in GR and NG patients, respectively. 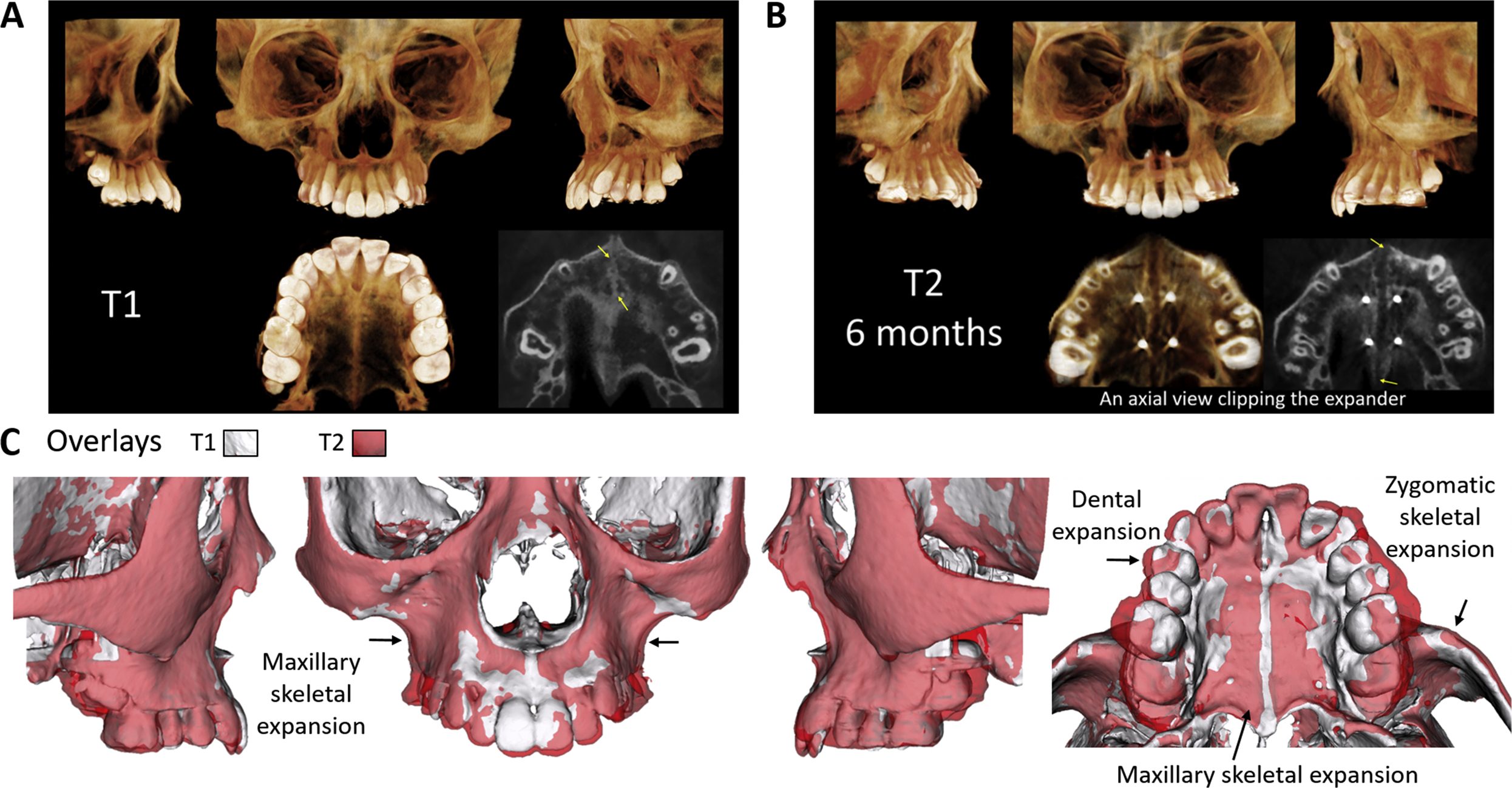 The impact of healing time before loading on orthodontic mini-implant stability: A histomorphometric study in minipigs