We found that an enriched vitamin E diet increases the rate of OTM in rats, suggesting that vitamin E may be useful as an avenue to accelerate OTM.

Vitamin E is a potent lipid-soluble antioxidant that prevents damage to cells by scavenging reactive oxygen species. Vitamin E is also known for its anti-inflammatory effect, inhibition of platelet aggregation, and immune enhancement. The recommended daily intake for adults aged >14 years is 15 mg (or 22.5 IU). Because of its antioxidant properties, 14.7%-22.9% of the United States population takes vitamin E supplements, and 1 in 9 adults takes more than 267 mg/d (or 400.5 IU). ,

Similarly, the results of animal studies were inconclusive. Fujita et al found that rats fed with high vitamin E diet (600 IU/kg) for 8 weeks had decreased bone mass. This study determined that serum α -tocopherol affects bone mass by regulating osteoclastic fusion, independent of its antioxidant activity. In contrast, Kasai et al fed rats with different doses of vitamin E diet (0 IU/kg diet for control, 30 IU/kg, 120 IU/kg, and 600 IU/kg) for 8 weeks and found that vitamin E consumption did not cause bone loss nor induced a reduction in bone density. Instead, they observed a tendency for an osteogenesis dominant bone mass increase in cancellous bones in the vertebral body, which may indicate beneficial effects on bone health. In summary, human and animal studies showed indeterminant effects of vitamin E on bone turnover and bone density.

Orthodontic tooth movement (OTM) involves bone resorption and formation. When force is applied to the tooth, the periodontal ligament (PDL) is compressed on the pressure side and stretched on the tension side. Compression of the PDL is associated with osteoclastic activity, whereas stretching of PDL is associated with osteoblastogenesis, causing bone resorption and bone formation, respectively. , Osteoclast activity and bone resorption are considered to be the rate-limiting factors in OTM. Numerous pharmacologic interventions, as well as invasive and noninvasive surgical techniques, have been tried on animals and humans to alter the limiting step of bone resorption to accelerate the OTM.

Groups 1 and 2 were fed a standard rodent diet of hard pellets. Groups 3 and 4 were fed a custom rodent diet supplemented with 600 IU/kg of vitamin E (Envigo Teklad Diets, Madison, Wis), the exact dosage described in Fujita et al. Rats were fed with the standard or supplemented vitamin E diet for 4 weeks before placing orthodontic springs. After the placement of the appliances, both groups were given crushed pellets to avoid the breakage of the appliance. We crushed the same type of food for each group of rats before placing the appliance.

Vitamin E comprises a group of 8 fat-soluble compounds, including 4 tocopherols and 4 tocotrienols. Alpha-tocopherol is the predominant form of vitamin E absorbed and accumulated in tissues. , , We measured the serum level of α -tocopherol in rats that received a supplemented vitamin E or regular diet for 4 weeks. Rats from both control and experimental groups were anesthetized with isoflurane (1%-4%), and blood was collected from the saphenous vein using a sterile needle. Serum α -tocopherol was measured using high-performance liquid chromatography.

Experimental OTM was carried out 4 weeks after the feeding period. The 10-week-old rats were placed under general anesthesia with xylazine (13 mg/kg) and ketamine (87 mg/kg). A custom mouth-prop was fabricated from 0.036-in stainless steel wire and placed between the maxillary and mandibular incisors to hold the mouth open. A 0.008-in stainless steel ligature wire was passed beneath the contact between the maxillary left first and second molars and threaded to the maxillary left first molar ( Fig 1 ). A low force/deflection rate nickel-titanium coil spring (Ultimate Wireforms, Bristol, Conn) delivering 10 g of force was attached to the 0.008-in stainless steel ligature around the left first molar, and the other end of the spring was attached to the incisors with 0.008-in stainless steel wire. The force/deflection rate for the spring was determined to calibrate the amount of force produced by activation of the nickel-titanium coil spring. In addition, grooves of 0.5 mm from the gingival margin were prepared on the facial, mesial, and distal surfaces of the maxillary central incisors to prevent the ligatures from dislodging from the incisor because of their lingual curvature and eruption pattern. Self-etching primer and light-cured adhesive resin cement (Transbond Plus; 3M Unitek, Monrovia, Calif) were applied to the lingual surfaces of the maxillary left first molars and incisors to secure the ligature wire. Moreover, to minimize the distal movement of the right incisor and to reinforce the anterior anchorage, the right and left incisors were joined together to act as a unit ( Fig 1 ). No force was applied on the right molars, which served as a control side. The appliances were checked every other day, and additional light-cured bonding material was added if necessary. Rats were killed by inhalation of carbon dioxide followed by cervical dislocation either 4 or 14 days after applying orthodontic force. The maxilla and femurs from each animal were dissected and fixed in 10% formalin for 5 days.

Microcomputed tomography (micro-CT) analysis was performed by the micro-CT facility at the University of Connecticut Health. Bones were dehydrated with a series of alcohol changes and submitted for micro-CT analysis. Bone volume fraction (BVF) tissue density and intermolar distance (IMD) were analyzed. Micro-CT imaging was performed at 55 kV and 145 mA, collecting 1000 projections per rotation at 300 ms. Serial images were used to quantitatively analyze alveolar bone changes in the region of interest (ROI) on the maxillary first molar ( Fig 4 ). The ROI was defined vertically as the most occlusal point of the furcation to the apex of the maxillary roots. Transversely, it forms a polygonal confirmation, which includes the points on the most distal part of the distobuccal root and distopalatal root and the other sides extending to the points of the most distal parts of the mesiobuccal and mesiopalatal roots. The right side of the maxilla served as the control side. IMD was measured in the sagittal plane, locating the image plane with the most root structure. The original 2-dimensional image was then magnified 10× for more precise line drawings, made at the closest proximity of the 2 convex molar crown surfaces. Measurement error was estimated to be ± 20 μm on the basis of nominal scan resolution.

Active osteoclasts were identified as TRAP-positive, multinucleated cells (>2 nuclei) that were in contact with the bone surface. The ROI selected for histomorphometry and osteoclast quantification in the maxilla included the alveolar bone in the furcation area of the maxillary first molar that extended from the most occlusal point of the furcation to the apex of the distobuccal root. A rectangular box was placed on the compression side (mesial side of the distobuccal root), extending 200 μm mesially into the alveolar bone. The ROI for the femur was defined as 250 μm away from the most proximal part of the growth plate and included trabecular bone from both (left and right) cortical edges. The ROI was extended 500 μm toward the diaphysis. The number of osteoclasts was defined as the number of osteoclasts divided by total bone perimeter in the defined ROI. Osteoclast surface was defined as the total surface of active osteoclasts divided by total bone surface in the defined ROI. Histomorphometric analyses were carried out using Osteomeasure Software (OsteoMetrics Inc, Decatur, Ga). Quantitative data were taken from 4 different sections per animal and analyzed statistically.

Descriptive analysis was used to summarize the data. The outcome variables examined were intermolar distance, BVF, tissue density, number of osteoclasts, and osteoclast surface. Mean, standard deviation, percentile distribution, and confidence interval was computed for all variables. The number of osteoclast and osteoclast surface were not normally distributed, and Wilcoxon signed rank test was used to compare them. Because of the sample size, nonparametric tests were used to examine the outcome variables. Statistical significance of differences among means was determined using independent t tests (GraphPad Software, Inc, La Jolla, Calif). The level of significance was set as P <0.05.

Rats from both groups had comparable weight when orthodontic springs were placed, which means the vitamin E enriched diet did not affect rats’ normal overall growth during the 4 weeks of feeding. The average weight for the regular diet group was 456.7 g, whereas the average weight for the vitamin E enriched diet group was 469.1 g ( P = 0.86). A supplementary statistical graph was added comparing rat weight from both groups ( Supplementary Fig 1 ).

One rat from group 4 (OTM for 14 days + vitamin E diet) was excluded from the study because the bonding of the spring failed. 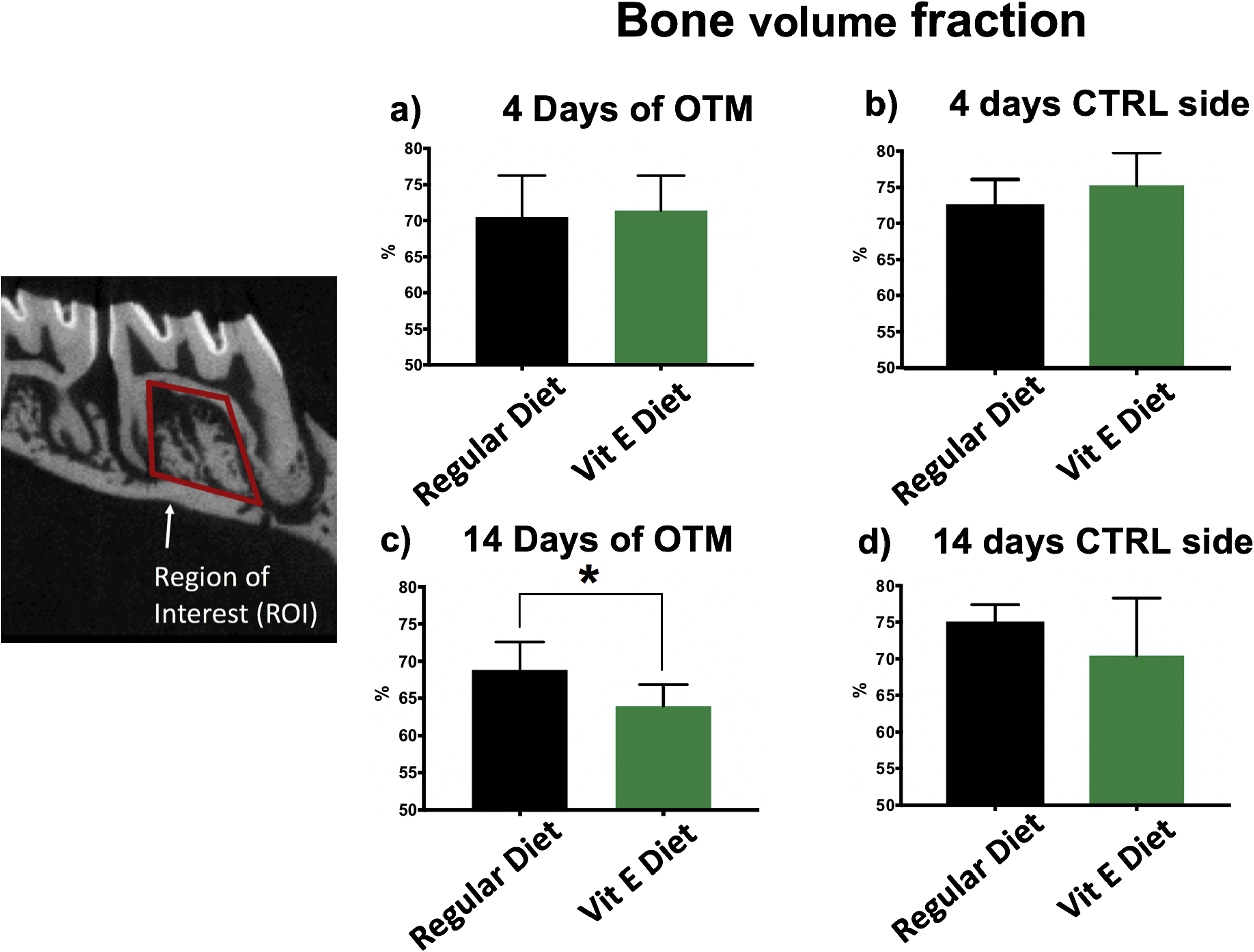 Next, we evaluated the expression of factors correlated with osteoclastogenesis, such as RANKL and MITF. We first performed immunofluorescence for receptor activator of nuclear factor κ-B ligand (RANKL), a widely accepted essential factor for osteoclast differentiation and OTM. We observed an expressive activity of RANKL all over the periodontal ligament of rats receiving orthodontic force 4 days after placement of orthodontic springs for both diet groups ( Fig 6 , A ). The expression of RANKL decreased for the regular diet group on day 14 but was still prominent for the vitamin E diet group, with a significant difference between groups ( Figure 6 , B ). However, we found no difference between groups in RANKL expression at the periodontal ligament of the control side, contralateral side not receiving OTM ( Supplementary Fig 2 , A ). We then examined the protein expression of MITF, a critical transcription factor for osteoclast development and function that has been associated with increased osteoclastogenesis as a result of a vitamin E enriched diet. Our immunofluorescence revealed a substantial expression of MITF in the vitamin E groups after 4 and 14 days of mechanical loading, whereas MITF expression was minimal in the regular diet groups for both time points ( Figs 6 , C and D ), suggesting that MITF might be involved in the sustained osteoclastogenesis until day 14 observed in the vitamin E diet group. Regarding the contralateral control side, we found no appreciative difference in MITF expression between regular and vitamin E enriched diets when the PDL was not loaded ( Supplementary Fig 2 , B ). Our data show that there was a trend for a decrease in femur bone volume in the vitamin E group ( Figs 7 , A and B ); however, the difference between the 2 groups was not statistically significant ( P >0.05). There was also no difference in femur bone density between the groups ( P >0.05, Fig 7 , C ). Moreover, our TRAP staining and histomorphometry quantification did not identify a significant difference in osteoclast numbers in the femurs of rats receiving high vitamin E or regular diets ( Figs 7 , D-F ). Moreover, there was no difference in RANKL or MITF expression between femurs of rats receiving vitamin E enriched or regular diet ( Supplementary Fig 3 ). Responses to spaceflight of mouse mandibular bone and teeth

The buccinator during mastication: A functional and anatomical evaluation in minipigs